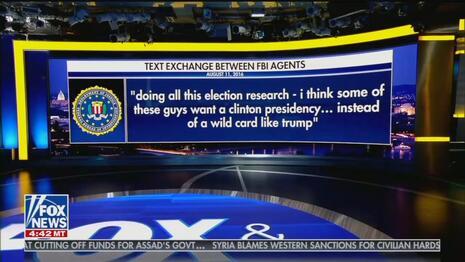 To no one’s surprise, the top morning and evening broadcast network newscasts have yet to utter a word about either of the week’s two major bombshells in how the FBI went about its spying of the Trump campaign and Operation Crossfire Hurricane. With one pertaining to text messages from FBI agents and the other about a key Steele dossier source having been investigated as a possible Russian spy, the wheels have come off and flown over the edge.

Thursday afternoon, The Federalist’s Sean Davis and Mollie Hemingway reported on a new federal court disclosure from Michael Flynn attorney Sidney Powell that FBI agents “tasked” with “tak[ing] down Donald Trump during and after the 2016 election were so concerned about the agency’s potentially illegal behavior that they purchased liability insurance to protect themselves less than two weeks before Trump was inaugurated president.”

Davis and Hemingway make clear that the senders of the texts were redacting, but the filing nonetheless consisted of “handwritten notes and texts from Peter Strzok, Andrew McCabe, Lisa Page, and FBI analysts who worked on the FBI’s investigation of Flynn.”

Here was a sampling of texts from Davis and Hemingway (click “expand”):

“[W]e all went and purchased professional liability insurance,” one agent texted on Jan. 10, 2017, the same day CNN leaked details that then-President-elect Trump had been briefed by Comey about the bogus Christopher Steele dossier. That briefing of Trump was used as a pretext to legitimize the debunked dossier, which was funded by the Democratic National Committee and the Clinton campaign and compiled by a foreign intelligence officer who was working for a sanctioned Russian oligarch.

“Holy crap,” an agent responded. “All the analysts too?”

“Yep,” the first agent said. “All the folks at the Agency as well.”

“[C]an I ask who are the most likely litigators?” an agent responded. “[A]s far as potentially suing y’all[?]”

“[H]aha, who knows….I think [t]he concern when we got it was that there was a big leak at DOJ and the NYT among others was going to do a piece,” the first agent said.

“[T]he new AG might have some questions….then yada yada yada…we all get screwed,” one agent wrote.

The FBI agents also discussed how the investigation’s leadership was consumed with conspiracy theories rather than evidence.

“I’m tellying [sic] man, if this thing ever gets FOIA’d, there are going to be some tough questions asked,” one agent wrote. “[A]nd a great deal of those will be related to Brian having a scope way outside the boundaries of logic[.]”

Several texts show that the order to close the criminal investigation against Flynn came as early as Nov. 8, 2016, the same day as the 2016 presidential election. It was later re-opened in early January of 2017.

The explosive new text messages also show agents believed the investigation was being run by FBI officials who were in the tank for Hillary Clinton.

“[D]oing all this election research – I think some of these guys want a [C]linton presidency,” one agent wrote on Aug. 11, shortly after the FBI opened the Crossfire Hurricane investigation against Trump.

In one series of texts sent the same day as the infamous Jan. 5 Oval Office meeting between Obama, Biden, Comey, Sally Yates, and Susan Rice, one agent admits that “Trump was right” when he tweeted that the FBI was delaying his briefings as incoming president so they could cook up evidence against him.

So the previous administration closed then reopened the probe into the incoming national security adviser after it had spied on the campaign of the opposing party? That seems like something journalists should be covering!

Of course, ABC, CBS, and NBC newscasts don’t actually care about any of this.

Speaking about the texts on Friday’s Fox & Friends, Hemingway called them “stunning revelations” and agents “that the leaks, the criminal leaks about the Mike Flynn phone calls with Ambassador Kislyak were done by high levels at the White House” and Trump was right to call into question the probe in January 2017.

The Hill’s Joe Concha noted such stories are “either getting buried or not even spoken about at all, which is utterly remarkable” while the people that should be called out on the carpet are instead “rewarded” with book deals and lucrative contributor deals with CNN or MSNBC.

“So, the more you do bad things, apparently in Washington, the more you get rewarded on the other end instead of being ostracized or even, I don’t know, charged with doing something. It’s utterly remarkable,” he added, citing Comey, McCabe, Page, and Strzok.

Thursday’s second bombshell came a few hours later when the Senate Judiciary Committee released an FBI memo declassified that revealed a key Steele dossier source was investigated by the FBI (with a FISA warrant) in 2010 for ties to key Russian intelligence officials.

And as CBS’s Catherine Herridge tweeted when the letter was released, the Crossfire Hurricane team knew this was the case in December 2016. Herridge’s network didn’t care about either of these developments and kept them off of CBS This Morning and CBS Evening News.

Knowing that, the Daily Caller’s Chuck Ross astutely pointed out that this has created only more “concerns that Russian disinformation was fed to Steele.”

For a news media so concerned about Russia around every corner and under every nook and cranny, they seemed to have fallen victim to doing Russia’s bidding. Who knew?!

For a liberal media that spent years touting the dossier and continues to level charges of being a Russian spy and Russian collusion against their political opponents, it’s worth calling attention to how the salacious document they’ve loved since first hearing about it in 2016 was a total lie.

Fox Business Network host Maria Bartiromo sounded off on this Friday during her show Mornings with Maria (click “expand”):

The primary source of the controversial Steele dossier, previously was investigated by the FBI for Russia contacts. This, according to information released by the attorney general, Bill Barr, in a new letter to Senate Judiciary Committee Chairman Lindsey Graham. Newly declassified information shows British spy Christopher Steele relied on a source that had “documented contacts with suspected Russian intelligence official for his 2016 anti-Trump dossier…[A]ll of this we knew already. It’s more information about the Steele dossier and its subsource, but already knew that, in January of 2017, the FBI knew that the sub-source made it all up, that it was hearsay. They interviewed him, his name is Igor Danshenko and they interviewed Igor Danchenko and he told them, oh, we were just having beers with friends. We were just making it up. We didn’t know if he was going to embellish anything but he did embellish everything. That is Christopher Steele. They used that dossier to get a warrant to spy on the Trump campaign. It’s all coming out[.]

[T]hey basically went and spied on the Trump campaign for no reason, they cooked up this idea that there was a — there was collusion going on and they got the whole country going nuts over it and, in fact, it was one big lie, made up.