COVER UP? The Hill Defends Biden on Fracking, Ignores Past Comments Democratic Presidential nominee Joe Biden just contradicted himself by claiming he was “not banning fracking.” Liberal outlet The Hill not only defended it but accused President Donald Trump of falsely stating Biden’s position. 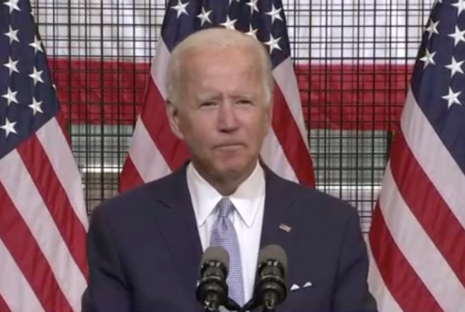 Biden pretended Monday in Pennsylvania: “I am not banning fracking. Let me say that again: I am not banning fracking. No matter how many times Donald Trump lies about me.” The Hill parroted this, and crazily said that “Throughout the Republican National Convention last week, speakers attacked Biden’s climate and energy plan, offering a number of misleading comments.” At the bottom of the piece, The Hill said that Trump “falsely stated” during the Republican National Convention that “‘Biden has promised to abolish the production of American oil, coal, shale and natural gas.’”

The Hill brazenly argued: “Biden’s climate plan calls for ending new oil and gas leases on public lands, but it would not ban oil drilling and does not bar any specific method for extracting fossil fuels.”

The article completely ignored mentioning Biden’s own comments to CNN’s Dana Bash during the second Democratic Presidential debate last year, where Biden said he would make sure both fracking and fossil fuels would be “eliminated:”

BASH: Just to clarify. Would there be any place for fossil fuels, including coal and fracking, in a Biden administration?”

BIDEN: No. We would work it out. We would make sure it’s eliminated and no more subsidies for either one of those. Either — any fossil fuel.

During the March 15, 2020 Democratic presidential debate, Biden said of fracking: “No more — no new fracking.” The Washington Post headlined its video grab: “Biden indicates from the debate stage that he would ban all fracking.” [Emphasis added.]

Grabien News founder Tom Elliot cut a video of Biden saying at a New Hampshire event in February: “We are going to get rid of fossil fuels.” In January, Joe Biden said in a video that he would end fracking in an exchange with a New Hampshire voter.

PROSPECTIVE VOTER: But like, what about, say, stopping fracking?”

The Hill initially didn’t mention any of this. It instead said that “Biden’s climate plan calls for ending new oil and gas leases on public lands, but it would not ban oil drilling and does not bar any specific method for extracting fossil fuels.” [Emphasis added.] The article was later stealth-edited to include a brief note on Biden’s comments during the March 15 debate: “[Biden] caused confusion during the March Democratic debate by saying he would not support ‘new fracking.'” No editor’s note was included on the addition.

The Hill also attempted to isolate Biden’s energy plan away from his former Democratic challengers as being less radical:

Biden’s climate plan wasn’t as bold as some of his earlier Democratic challengers, but it is still the most ambitious climate plan ever put forth by a presidential nominee.

Contact The Hill Editorial department at editor@thehill.com and demand they correct the record on Biden’s past support for banning fracking.