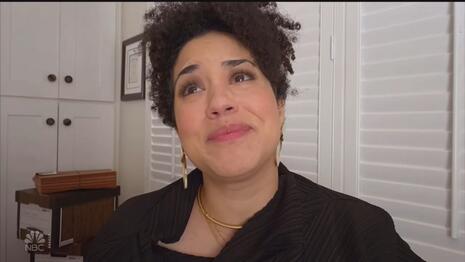 2020 has been a rough year, but the one thing worse than 2020 is liberal TV’s version of it. NBC’s Connecting… was the latest attempt to try and work COVID-19 lockdowns into a series, though really it’s all the worst leftist angles of the year. Whether it was enjoying being locked in your house all day or calling out “colonizer behavior,” Connecting… was essentially a quarantine from reality.

The October 29 episode “Day 82” involved one of our characters, Michelle (Jill Knox), trying to meet a work deadline at home all the while dealing with the aftermath of the George Floyd video and her friends’ reactions to it. Considering this was supposed to take place on “Day 82” of the lockdowns, I suppose the show didn’t care about looking deeper into the George Floyd case other than what BLM told them. That became pretty clear as we saw Michelle’s non-black friends appeal to her.

For example, we had a scene with Annie (Otmara Marrero) discussing with Michelle what angry comment to leave under an “All Lives Matter” Facebook post. Check out all the hatred that stems from even saying it:

Michelle: It’s all good. I just have a lot of work stuff. Why’d you call?

Michelle: The one who sells used bouncy castles?

Michelle: You gotta get off Facebook, Annie. Facebook is for cute kitten videos and to see which one of your high school friends joined a yoga pant pyramid scheme.

Annie: Can I just get your opinion on a comment I want to leave? You always know what to say. Just blink if you hate it.

Michelle: I can do that.

Annie: Okay, this is the first draft. “Daniel, you’re a sexist, racist pig, but it’s not your fault.”

Annie: “The problem is systemic. You grew up shrouded in stupidity and ignorance. Saying ‘all lives matter’ is stupid. All lives can’t matter until Black lives matter. Can you even spell ‘racist,’ racist?”

Annie: I’m almost done. “But I love you and our family, so I’m calling you in online in front of all your lame-ass Crossfit friends.” That’s it.

Michelle: Are you trying to embarrass your cousin or teach him?

Annie: Both. Maybe embarrass a little more than teach.

Michelle: Annie, your cousin’s not gonna listen to you if you try to make him feel stupid and embarrassed!

Annie: Well, maybe he should stop being stupid and embarrassing! He wore a Big Dog t-shirt to my aunt’s vow renewal.

The show was supposed to look into the nuances of people during a lockdown, yet all of these characters seem to be happily employed with angry Facebook comments being a priority.

It got worse when Michelle’s white friend Rufus (Ely Henry) popped in to discuss the subject of reparations. Even though Rufus agreed with the idea of reparations because of white guilt, Michelle called his attitude “colonizer behavior” since he didn’t care a few days earlier. Here I thought people wouldn’t listen if you made them “feel stupid and embarrassed”:

Michelle: No, Rufus, you cannot citizen’s arrest people for not wearing masks.

Rufus: Did you know that slaves built the White House?

Michelle: No, that’s what you’re calling me about? I’m dealing with two separate deadlines right now!

Rufus: What if we could pay the descendants?

Michelle: Are you talking about reparations?

Rufus: Give every Black family in the United States Bitcoin. All they would need is an external hard drive and a smartphone. Preferably Android.

Rufus: I know! I can’t believe I didn’t think of it sooner!

Michelle: Reparations isn’t some new idea you cooked up! It’s been around.

Rufus: Look. 40 acres and a mule could be 4.5 million Bitcoin and electric Heelys.

Michelle: Assuming that Black people need the guidance of a white man who only just a few days ago started caring about these issues…is a little racist.

Michelle: I’m not calling you racist. I’m saying this notion that you are somehow better-equipped– look. You can’t just pop in and solve problems you just recently started learning about. That is literally colonizer behavior.

This culminated in a call from Michelle’s mother Dayleen (Loretta Devine). Dayleen sensed that something’s wrong with Michelle, leading her to admit her stress and claim it’s “really hard to be Black right now.”

Michelle: Um…You know, today was pretty damn hard. Everyone needed me. I– I had to turn in a document for my job, I had to revise it twice, take calls with all my friends, I had to help all my work colleagues. I had to explain reparations! I know they all mean well, but um… I just can’t help everyone all the time, you know? And, uh, Garret’s going through it too, um, but he’s shutting me out, and I get it, um, but it’s hard. It’s hard doing everything for everyone literally all by myself. And the videos online and the articles and the tweets… It’s just bad news after bad news after bad news. And, um… It’s just, um, really hard to be Black right now.

Michelle broked down because she felt like she had to help everyone but ironically, it was all her liberal do-gooder non-black friends’ virtue signaling neediness that stressed her out. And it’s the liberal media that makes people feel like it’s “just bad news after bad news after bad news” when it comes to being black in America but that is not only nonsensically wrong but horribly damaging as well. Just look at Pennsylvania.

With all these terrible features, Connecting… might just be the show to help people disconnect from broadcast television.

This show was sponsored by commercials from Target, Toyota, and Kohl’s.