Morning Joe‘s opening segment today consisted of one long complaint about the unvaccinated hordes that are going to make us all have to mask up again. Mika Brzezinski condescended to the Americans of Walmart, saying they would be “fighting over whether or not they have to wear their masks.” Mika can’t imagine a mask squabble among the hoi polloi at Saks Fifth Avenue.

Vaccinations have broken the pandemic, but the leftists in California are already reimposing mask mandates. Brzezinski reported that five Texas Democrats in D.C. tested positive over the weekend, but Morning Joe suppressed the fact that Vice President Kamala Harris had a “routine appointment” on Sunday morning at Walter Reed Hospital. Substitute co-host Jonathan Lemire (from AP) dutifully passed along the claim from Harris’s office that she is “fine.”

And with Joe Scarborough having the day off, Mika did her best impersonation of one of his unhinged rants. Literally yelling at the camera [see screencap], Mika scolded people who refuse to be vaccinated: 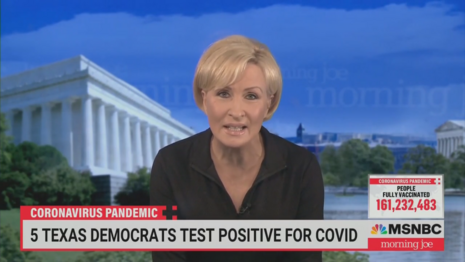 The reason we’re going to have to go back to it [shouts at camera] is because of the unvaccinated! Because they’re allowing the variants into this country and they’re getting the vaccinated people sick. And the only way to keep it from passing person to person,if you’re not going to get a vaccine, is to wear a mask.

She ended her tirade with an angry, frustrated, huff!

Morning Joe suppressing Kamala Harris’s visit to Walter Reed hospital after meeting with Covid-infected Texas Democrats, and Mika Brzezinski condescending to the People of Walmart, was sponsored in part by Casper, and—ironically—Walmart! Perhaps Walmart would be interested to learn that a show it sponsors is looking down its elitist nose at Walmart shoppers!

MIKA BRZEZINSKI: More news around coronavirus this morning. Five Texas Democrats have now tested positive for Covid since coming to Washington last week. All are members of the state House delegation that fled to D.C. in an attempt to block Texas Republicans from passing restrictive voting laws. All five are said to have been fully vaccinated. The Texas House Democratic caucus says the five are feeling good, or with only mild or no symptoms.

And Jonathan Lemire, this is my next point. Obviously, we’re going to be talking to experts throughout the week about this. But the delta variant and the vaccinated are being impacted by this new variant. And those who are unvaccinated who are allowing this virus to really fester through the country. People who have been responsible and gotten their vaccines are now being stricken!

JONATHAN LEMIRE: That’s right, Mika. And what we see first in this Texas case, we have seen a number of Republicans seizing on this, and suggesting — blaming them. There’s a picture that went around last week when they first arrived in Washington, they were on a flight from Texas they weren’t wearing masks.

And this may hinder their ability, these legislators, to have meetings while in D.C. We have some positive cases now. We know they met with Vice-president Harris at the end of last week. Her office says she is fine. That she did not reach the threshold where she has to quarantine. And there had been talk of meeting with President Biden this week. But that may get more complicated considering these positive cases.

And the reason we’re going to have to go back to it [shouts at camera] is because of the unvaccinated! Because they’re allowing the variants into this country and they’re getting the vaccinated people sick. And the only way to keep it from passing person to person, [shouts loudly] if you’re not going to get a vaccine, is to wear a mask! [Grunts in frustration] Uhh!