Cuomo Mocks GOP as Like Child Rapists, Then Gets Caught Lying by Denying He Ever Said It 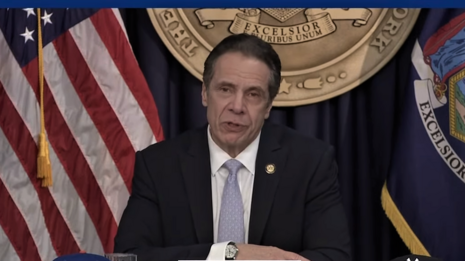 The Washington Post was embarrassed when it misquoted Donald Trump in a January “scoop” using an anonymous source. Audio emerged and the Post was embarrassed. Sister Toldjah at RedState provides an opposing example, where Gov. Andrew Cuomo denied mocking a left-wing activist, and the Times found audio that proved Cuomo was lying.

The Times reported with anonymous sources in February:

In the fall of 2018, for example, when Mr. Cuomo was told by a leader of the Working Families Party — which had backed his primary opponent, Cynthia Nixon — that it would endorse him in the general election because he was better than a Republican, Mr. Cuomo’s response was blunt.

“If you ever say, ‘Well he’s better than a Republican’ again, then I’m going to say, ‘You’re better than a child rapist,’” the governor said, according to two people who were on the call. “How about that?”

Cuomo and his press team denied he ever said that, suggested a Republican is roughly the moral equivalent of a child rapist. On Friday morning, Times reporter Nick Confessore tweeted: “The @nytimes obtained audio tape of Cuomo threatening to attack a political operative who crossed him as a ‘child rapist.’ Cuomo admin denied this account at the time.”

In a 2018 phone call w/ the leader of NY’s Working Families Party, @NYGovCuomo takes umbrage at how they’re wording their endorsement of him:

“If you ever say, ‘Well he’s better than a Republican’ again, then I’m going to say, ‘You’re better than a child rapist’” [via the NYT] pic.twitter.com/ZTo5YpdjSl

The New York Times podcast “The Daily” — which airs on many NPR stations — played the audio on Friday’s episode. Sister Toldjah added:

I listened to the entire podcast today, and what was especially interesting to me was in the discussion that started at around the 20-minute mark about how Cuomo became obsessed with the fawning coverage he got last year, so much so that he would have staff members monitor coverage to see who was saying what about him. One of his accusers, Charlotte Bennett, has said she believes the media’s fawning adulation of Cuomo last year emboldened him to be an even worse person, because he began to believe he was untouchable.

Pro-Cuomo liberals trying to protest that Cuomo was “mischaracterized” by Confessore because Cuomo didn’t really mean he would call the activist a “child rapist,” that he was just trying to make a rhetorical point. The point here is that Cuomo is a thin-skinned jerk who can’t accept an endorsement from the far left without venting his spleen.