Deadspin’s Rob Parker: Fans Are All Racists So Just Shut Up And Cheer 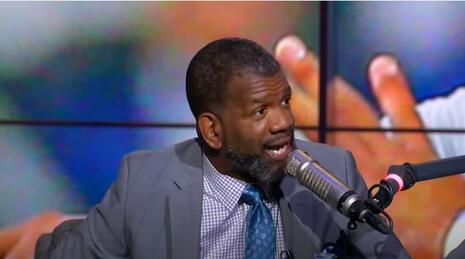 To all the NFL fans who booed social justice activists during the weekend’s season openers, you are racists and just like racists of the distant past, too. In fact, Deadspin race-baiter Rob Parker said, “fans being racist is nothing new,” and a disgrace to be expected.

“For as long as we can remember, sports fans have been on the wrong side of history,” Parker wrote in Deadspin. Furthermore, he said fans have turned their heads to injustice, cheered when players have been beaten down, bloodied and lay motionless. They’ve even made “awful racist taunts at the ballpark that would make the Klan proud.”

Today’s opponents of the Black Lives Matter movement, such as those at Kansas City who booed the whole social justice movement underway at Arrowhead Stadium during the Chiefs-Texans game last week, are directly connected to racist fans going back more than 70 years.

Fans “sat through years of segregation in Major League Baseball quietly” before baseball’s integration in 1947. They treated Jackie Robinson, the first African American to play in the majors, horribly, Parker wrote. “They could have easily ended it by not going to games as long as the game continued to bar Black players from playing.”

There’s a big-league problem with this ridiculous statement though. Most of today’s fans weren’t even born then, but they’re lumped into one big guilt bucket and associated with the fans who sat quietly for segregation. Now they don’t boo athletes based on race, but on disrespectful behavior.

The fans who offend Parker today are practically perpetuating a systemic line of racist fans, in his jaded view. In fact, he said: “The same people who spit on Black people at the Woolworth’s counter in 1960 in Greensboro, N.C. were probably sports season ticket holders, too.”

Parker’s rant includes a lengthy list of racism that took place in American sports events going back over time. Some of those incidents involved very few violators.

For instance, in 2017 while playing in Boston, Baltimore Orioles center fielder Adam Jones was taunted and had a bag of peanuts thrown at him. “A disrespectful fan threw a bag of peanuts at me,” he said, adding, “I was called the N-word a handful of times.” The media practically made a federal case out of this, still harping about it now. A single fan was ejected for that regrettable behavior, but the whole city is often indicted by sports writers for racism.

Retired baseball pitcher CC Sabathia was quoted in Parker’s story about having been called the n-word in Boston. He said that’s the only stadium in all of baseball where he witnessed such racism. It’s hardly a blanket indictment of masses of sports fans.

Nonetheless, Parker says we should not excuse racism in baseball as a matter of “uneducated people” who just don’t know any better.

Next, Parker recounts how, nearly four decades ago, former Georgetown University basketball player Patrick Ewing was on the receiving end of despicable behavior by racist fans. It’s another example of declaring everyone guilty for the sins of a few bad apples way back when.

Then in 2018, the New York Rangers’ black Black defenseman K’Andre Miller was on the receiving end of racial slurs from fans.

Athletes shouldn’t fret over these isolated incidents, though, because Parker said: “These are the same people you can never count on when things get tough.

“And truth be told, you don’t need the fans to endorse or support the effort. Anybody against equality and fairness isn’t someone you want on your side anyway.”

So we’re all racists now, and as sports fans we are denied the free speech rights that the privileged activists on the field are accorded. Just shut up and cheer.