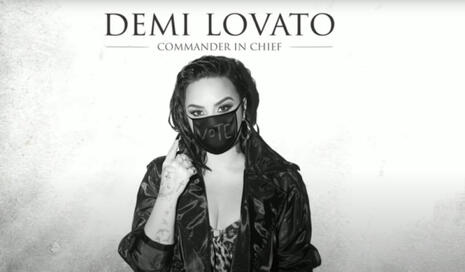 On October 14, Demi Lovato released the song online prior to her performance on the Billboard Music Awards. The song, which was co-written by Lovato, includes unsubtle lyrics such as “Do you even know the truth/We’re in a state of crisis/People are dying/While you line your pockets deep/Commander in Chief/How does it feel/To still be able to breathe?” and “We’ll be in the streets while you’re bunkering down loud and proud best believe we’ll still take a knee.” The song does not mention Trump by name, but Lovato has been clear that the song is a direct slam against him.

In an interview with CNN, she described her emotional state when writing the song:

“There’s been so many times that I’ve wanted to write the President a letter or sit down with him and ask him these questions,” she told CNN. “And then I thought, I don’t really actually want to do that and I thought one way that I could do that is writing a song and releasing it for the whole world to hear and then he has to answer those questions to everyone and not just me.”

Surprisingly, she adds that she doesn’t want to “stoke division” with the song but merely wants to encourage people to get out and vote. She says, “[W]e have to turn up and vote because it’s so important that our voices are heard. And, honestly, for me, whether you are a Republican or Democrat, just get out and vote.” Somehow, I find it hard to believe someone who believes that the president “lines his pockets deep” would be perfectly happy if her fans voted Republican.

Of course, mainstream media like Entertainment Weekly and Variety are only happy to help her shill this “political anthem.” Most sites and fans have been complimenting her “courage” to speak out against “injustice,” as if parroting liberal talking points shared by 90% of the entertainment industry is risking anything. Still, Lovato agrees as much as she compares herself to Taylor Swift’s shift into politics.

You’re damned if you do, you’re damned if you don’t. You can list Taylor Swift as a perfect example of that exact saying … for years she got trashed because she wasn’t taking a stance and wasn’t standing up for these rights and she kind of took a back seat and now she’s become very political and there are people that are unhappy with that too. It’s just, like, you have to live what feels authentic to you. To me, that’s using my platform to speak out about the things that I see that are wrong.

There’s living “what feels authentic to you” and then there’s calling out the president for apparently letting people die. Taylor Swift was just as dishonest as that in her support for Joe Biden, and it’s pretty clear that’s the reason people are “unhappy.” If they want to vote for Biden, that’s fine. Let’s just not pretend that they speak for justice.

Lovato has also pushed information on her social media on how to get involved with voting and has stated that she will release an additional music video after her performance. With three weeks to go until the election, this is far from our last celebrity meltdown.