‘Democracy in Jeopardy:’ ABC’s ‘Black-ish’ Pushes ‘Conspiracy Against Us Voting’ 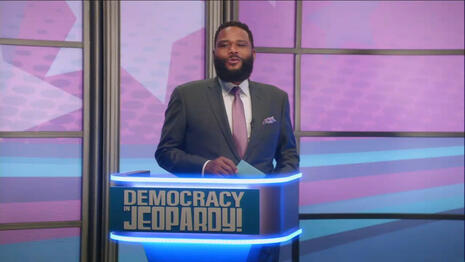 ABC’s favorite racial comedy black-ish took to our television screens earlier than expected Sunday night (their season doesn’t officially begin until late October) to bring us a double-episode lecture on the presidential election and America’s voting process. Given the show’s history, we could already imagine what kind of leftist bias was coming before the episodes even began.

The first episode begins with Junior (Marcus Scribner) being removed from voter rolls despite registering to vote for the first time and being eager to cast a vote in the presidential election. This leads to a skit where his father Dre (Andre Johnson) is host of “Democracy in Jeopardy” – “all the fun of trivia and all of the unfairness of the American political system:”

Dre: Our next question — Who votes to determine the winner of a presidential election?

Dre: Good for you, for $100. The president, in fact, is chosen by an unelected group of 538 people who you’ve never heard of. Who are they? How did they get there? You’ll never know.

Charlie: Uh, that’s the definition of the Illuminati.

Charlie: Yes! Can I get that up out you right now?

Dre: Our next question. True or false — Even with the Electoral College, everyone’s vote for the president counts the same.

Josh: True. One person, one vote.

Dre: Ooh. Sorry. The answer is false. States with smaller populations get more power. So if you’re from Wyoming, congratulations! And if you’re from California, prepare for the Big One. But you are better off than all the people in Puerto Rico and the U.S. Virgin Islands and all of the other less vacation-y U.S. Territories. They have no say-so in who the president is, but lucky for them, they still get to pay taxes.

Dre: All right. Here’s our final question. Why was the Electoral College implemented?

Charlie: Illuminati! It’s got– It’s gotta be the Illuminati.

Dre: Ooh. Sorry, Charlie. The answer is slavery. The answer is almost always slavery. Did you know that four of the first five presidents were from the South? The other, John Adams, was from Boston, the South of the North. Uh-oh. Looks like we’re out of time. Let’s tally up the scores and see who our winner is for today. Okay. It looks like our winner is Contestant One!

Miss Biggs: What? But I’m winning.

Dre: Ooh. You were winning. But your points only count for three-fifths of a White man.

Funny, I don’t remember anyone complaining about the electoral college when Obama won. And just how does a black man win an election to become president if America is so racist and suppresses black voters? Never mind that even the liberal New York Times debunked the claim that the electoral college is racist and called it a “myth.” Because emotions over facts, right?

Junior ends up questioning the system after the game show. He learns about how the Fifteenth Amendment was undermined by literacy tests and how a big part of the Voting Rights Act of 1965 was “ripped out” by the Supreme Court. Junior then decries that “the system just keeps on finding ways to make sure our voices don’t matter! You know, I’m starting to feel like this country isn’t what I thought it was.”

After Junior’s sister Diane plays a montage of a young, black woman who is unable to vote due to hindrances such as long lines that are also supposed to be a conspiracy to suppress the black vote, Junior is even more upset and proclaims, “The greatest trick that the Founding Fathers ever pulled was convincing us that we were a real democracy.” (Hint: The United States was never intended to be a direct democracy.)

Dre then says in a voiceover, “America hasn’t wanted Black people to vote since the day this country became a country. He learned that the system isn’t broken. It’s working exactly how it was designed.”

Dre goes on to agree that there is “a conspiracy against us voting.” He says, “The machine was built to keep us out. But the only time that things changed in this country is when people did whatever it takes to make their voices count. From the Civil War to Women’s Suffrage to the Civil Rights Movement, America got better when more people voted.”

So, which is it? America corrected its mistakes in the past and got better, to the point that a black man was able to become president? Or that America is still conspiring against black voters? Looks like black-ish wants us to believe it’s the latter.

Junior ends up voting via mail-in ballot being sure to send his in early because “they are doing all they can to slow down the mail service.” Again, who is this “they?” The mail has been slower due to COVID-19, by the way. But let’s buy into a racist conspiracy theory instead. #eyeroll

The second episode is in cartoon form and starts out with praise for AOC for going “from making margaritas in Manhattan to making history in Congress.” Then Dre points out in his usual voiceover, “Anyone can go from the outhouse to the White House, no matter their background. You just have to have what it takes.” Again, confusing messaging. Does the system work or not? They can’t have it both ways.

Dre’s boss Mr. Stevens, who is the show’s caricature for a tone-deaf, racist and ignorant white man, decides to run for Congress.

Dre ends up surprised to hear his black coworker Charlie showing support for Stevens’ campaign, at which point we are treated to racism towards white people, classism and a dig at Citizens United, just as Newbusters predicted:

Dre: You support this, Charlie?

Charlie: There’s always room for one Black guy in a campaign like this. Bush had Powell, Trump had Carson, Obama had… Obama.

How did you even get on the ballot?

Stevens: I’m a rich White man. I asked. Gentlemen, I believe it’s time for me to go get photographed with an eagle. Careful with that bird. He was a Christmas present from Ted Nugent.

Dre: How does that make sense?

Bow: It’s normal behavior for guys like him — when the wiener pills stop working, they try to screw the country.

Pops: Problem is White men don’t know how to be bored. That’s why they’re always opening up vineyards.

Dre: Well, he’s wasting his time. As soon as Ronan Farrow gets ahold of that folder labeled “Do not show Ronan Farrow,” it’s over.

Diane: Well, I’m for it. I’m in favor of anything that brings us closer to society breaking down.

Dre: Don’t get too excited. Stevens doesn’t stand a chance.

Ruby: I wouldn’t be so sure. A tall White man with all his original hair? He’s already got my vote.

Pops: Mm-hmm. Mine too. I like that he’s a bad person. A politician should be willing to get his hands dirty. Marion Barry bought crack. You tellin’ me he can’t handle the parks department?

Dre: Guys, you really think Stevens can get elected?

Junior: Dad, I am totally with you. What are his chances? He’s sexist, out of touch, completely amoral –Oh, God. He’s gonna win.

Dre decides to run himself and Junior sets up a video call with election conspiracy theorist Stacey Abrams who tells Dre he doesn’t stand a chance, but encourages them all to vote early via mail-in ballot.

Dre almost ends up falling for the corrupt demands of a stranger financing his campaign but then stands up to him. He opines, “When you have to take millions from private interests just to run, there’s no way principles can come first. Even an honest man doesn’t stand a chance.” Does this mean he’s admitting Obama wasn’t honest and put special interests first?

He continues, “People, we need to reduce corporate influence on politics, stop unlimited money in campaigns, and keep track of where funds are coming from.”

Well, if all of this is any indication of how the new season of black-ish will be when it starts at the end of October, we’ll definitely be in for a lot more liberal lecturing and racist conspiracy theories about this great country, sadly.

If you are offended by these episodes and would like to make your voice count, here are several advertisers you can reach out to: