Rittenhouse was charged with murder on Wednesday after two people were shot dead Tuesday night. Video from the first shooting appears to show the alleged victim charging the shooter before shots were fired.

The second victim died after appearing to chase after and lunge at the alleged shooter, who had tripped and fallen while running away from the scene of the first shooting.

“A 17 year old white supremacist domestic terrorist drove across state lines, armed with an AR 15,” Pressley wrote on Twitter. “He shot and killed 2 people who had assembled to affirm the value, dignity, and worth of Black lives.”

“Fix your damn headlines,” the congresswoman added. Her tweet quickly went viral, earning more than 33,000 retweets and 109,000 likes on Twitter by midnight. 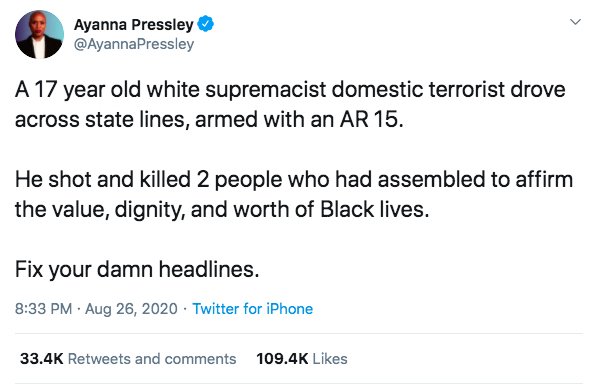 Rittenhouse told Daily Caller chief video editor Richie McGinnis on Tuesday before the shooting that he was on scene to “help people” and protect local businesses after widespread rioting and looting racked the city.

So people are getting injured, and our job is to protect this business, and a part of my job is to also help people,” the 17-year-old told McGinnis, who later rushed to aid the shooting victim, using his own shirt to try to stop the bleeding.

“If there’s somebody hurt, I’m running into harm’s way. That’s why I have my rifle because I need to protect myself, obviously. But I also have my med kit,” Rittenhouse added.