Deplorable Scarborough to Trump: ‘Heard You Had Mein Kampf By Bedside’ You’d think Joe Scarborough would be more careful in flinging unfounded accusations. After all, when President Trump (with no evidence) suggested in a series of tweets that Scarborough could be implicated in the death of a field-office employee, it set an enraged Scarborough off on a vendetta that persists to this day.

But on today’s Morning Joe, the shameless Scarborough peddled a debunked story, saying:

“I heard you had Mein Kampf by your bedside.”

Scarborough uttered his allegation in the context of gleefully dancing on what he presumes to be President Trump’s political grave, with the Electoral College set to cast votes today. Scarborough suggested that instead of Mein Kampf, President Trump should have been reading the Constitution. 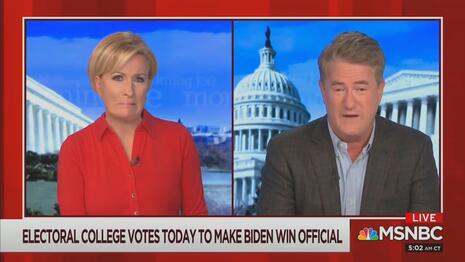 Even the Trump-unfriendly Snopes has labeled the Trump/Mein Kampf story “False.” Here’s what the liberal Snopes said:

Not only were we unable to locate an original source for this quote, or evidence that Time magazine even interviewed Trump in 2002, but we found no discernible record of its existence before the meme first surfaced in April 2019. Yet it’s the kind of statement that would have been quoted ad nauseum in the press had Trump said it. No such references exist.

A bit later, the hate-consumed Scarborough thrice said that Republicans “suck,” and accused them of “sniffing” Trump. Pro tip for Joe: avoid mentions of “sniffing.” It brings Ol’ Uncle Joe to mind.

Shameless Joe Scarborough peddling the debunked story that Donald Trump had a copy of Mein Kampf at his bedside was sponsored in part by Liberty Mutual, Mazda, and Sandals Resorts. Contact them at the Conservatives Fight Back links to let them know what you think of their sponsorship of this sort of garbage.

JOE SCARBOROUGH: Yes, I think most of Americans are just tired of winning. Watching Joe Biden, day after day after day, and the lawsuits, getting crushed by your own Trump-appointed federal judges who you were so sure would rig the election for you.

MIKA BRZEZINSKI: They keep letting you down.

SCARBOROUGH: It should have been a little bit of history, and you would understand [bursts into laughter] that Supreme Court Justices, they can’t, they can’t do what you’re asking them to do, and —

MIKA: You can’t fire them!

SCARBOROUGH:  — and we have institutions in this country that have not folded to a failed reality-TV host.