Amazon’s Halo surpasses Apple Watch and Fitbit with features “that have never been seen in a mainstream wearable device, including one that tracks a user’s emotional state by listening to the tone of their voice, and another that provides a three-dimensional rendering of their body,” CNBC reported August 27. This is a massive step towards a futuristic dystopia where users are encouraged to provide the information of their lives’ most private details to Big Tech companies. 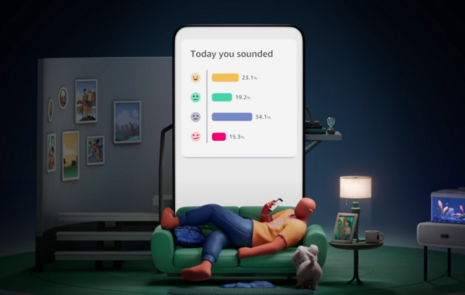 Research Fellow at the Center for Applied Data Ethics Ali Alkhatib commented on the product with extreme skepticism:

“amazon, through ring, collaborates with cops to turn neighborhoods into surveillance states.

“so if you want to ponder the prospect of police murdering you and then using data from amazon to say you were emotionally aggressive when they killed you, then sure go for it.”

He added in a subsequent tweet that “even if amazon didn’t work w/cops,” and “even if they didn’t work w/an insurance co to coerce you into sharing your data w/them,” the technology would still be “dangerously flawed.”

CNBC explained how the Amazon Halo “goes beyond traditional fitness tracking with two unique features,” including tone and body.

“Tone” was the first feature the article described:

“Tone is an optional feature that listens to the user’s voice throughout the day and analyzes that information to present a picture of how they felt — for instance, showing times they were feeling energetic, hopeful, or hesitant. For instance, the device might pick up on an argument, or a tense conversation at work, and indicate that the user felt elated at 10 a.m. but hesitant 30 minutes later.”

CNBC claimed that Amazon has denied that user voice samples will be recorded:

“Amazon says none of the voice-based snippets are stored in the cloud and they’re automatically deleted once they’re processed. The company also said it won’t use the voice recordings for targeted advertising.”

“Body” was the second unique feature the article explained:

“Body gives users a three-dimensional rendering of their body with information about their weight and body fat percentage. Measuring body fat percentage is typically difficult, but it’s a lot more helpful than the more widely used body mass index, which can mistake muscle for fat, leading to mistakes like labeling body builders as obese.”

The process for scanning the body might appear invasive to some in that it requires users “to stand in front of their phone in various positions, then takes photos from the front, back and both sides,” before responding with a quick assessment. “As users take scans over time — Amazon recommends doing one every two weeks or so — the Halo app generates a body model with a slider, which users can move back and forth to get a visual representation of their progress,” CNBC explained.

Amazon has a checkered past when it comes to user data.

“Amazon reportedly employs thousands of full-time workers and contractors in several countries, including the United States, Costa Rica and Romania, to listen to as many as 1,000 audio clips in shifts that last up to nine hours,” CNN reported. The same article observed that “The audio clips they listen to were described as ‘mundane’ and even sometimes ‘possibly criminal,’ including listening to a potential sexual assault.”

Your Privacy is Under Attack by Big Tech. Call up Amazon at 1 (888) 280-4331 and demand that it stay true to its commitment to not store user voice data. Contact us at the Media Research Center contact form, and help us hold Big Tech accountable