Do Reporters CARE That a BLM Protester Attacked a Journalist? 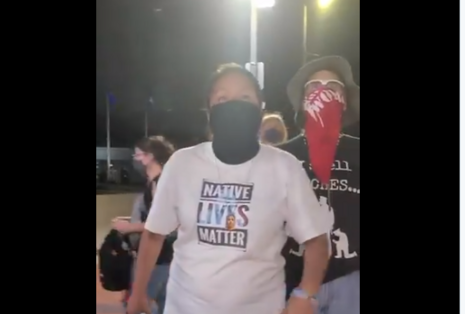 File this under something you think journalists would care about. A violent Black Live Matter member has attacked a journalist.

On Tuesday, Alpha News, a Minneapolis-based company “that covers stories the local press would rather ignore,” learned one of its journalists had been “accosted and assaulted” by “a vicious group of BLM zealots.”

According to an article posted on Tuesday by reporter John Hinderaker on the Powerline blog, Rebecca Brannon was covering a protest in downtown Minneapolis when she was attacked by several “protesters” he also described as “thugs.”

One woman struck Brannon repeatedly and attacked her with a construction cone. Ultimately, the BLM thugs stole Brannon’s phone, with which she had been videoing them, and threw it into a fountain.

The phone was destroyed, but Brannon was later able to recover video of the incident from the phone’s SD (Secure Digital) card. The video abruptly ends when the phone was ripped from her hands.

“It is easy to understand why Black Lives Matter activists do not want to be filmed by an independent journalist,” Hinderaker noted. “If more people understood that BLM is a violent, Marxist organization, its support would evaporate quickly.”

The demonstration was a response to a police officer shooting a black man in the back in Kenosha, Wisconsin, that turned destructive and led to 11 people being arrested late Monday and early Tuesday outside the Hennepin County jail.

The arrests came after some of the roughly 100 demonstrators broke windows at the jail and threatened to breach its security, according to a report from the local sheriff’s office.

The city police made five arrests of their own, those occurring near the downtown precinct headquarters, noted department spokesman John Elder. One was for suspicion of property damage and the others for various misdemeanor offenses, Elder stated.

After the shooting took place, police deployed tear gas, flash bangs and rubber bullets upon protesters and erected a fence around the local courthouse. Hinderaker concluded: “I suppose the thugs who attacked Rebecca Brannon did not want their criminal activities to be exposed.”

For a reality check on Black Lives Matter — and what the organization actually stand for — see this NewsBusters reality check. We call it: Facts Feared By Leftist Media.