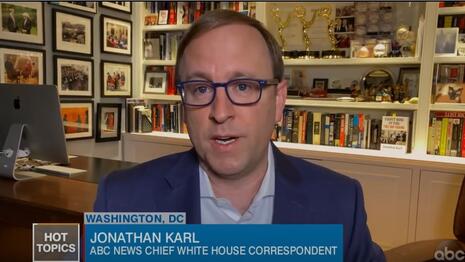 ABC’s Jonathan Karl gave an interview to Mediaite and demonstrated the notion of cognitive dissonance. He finds it unfortunate that people think the press acts as the Resistance to Trump, and yet, he wants to reverse his negative take on CNN White House shrieker Jim Acosta in his reporter’s memoir, insisting on reflection that Acosta’s bombastic aggression has been “vindicated.”

These concepts merge together about as well as the notion of being a Planned Parenthood-endorsed “devout Catholic.”

Mediaite’s Aidan McLaughlin asked if the press has “fallen into a trap” of looking like advocates instead of being more “reserved.”

KARL: I do believe that unfortunately, there is a big chunk of the country that believes that the press is now the Resistance and I think it’s really unfortunate and I think that it has negative consequences for a free press. I think it has negative consequences for our democracy. But I think that the aggressive questioning of the president, particularly now in the wake of what we’ve seen unfold with the pandemic is absolutely necessary. Not only justified but necessary.  And I was quite critical of Jim Acosta. I also believe Jim Acosta is a fine reporter. And I think that things the events that have played out since those early days of the Trump White House have in some ways vindicated Jim Acosta.

In his memoir Front Row at the Trump Show, Karl wrote Acosta was doing it all wrong, that reporters shouldn’t make speeches and they shouldn’t talk about organizing protests outside the White House, as Acosta did. Now? Karl’s changing his tune, embracing the Trump Hater style:

KARL: I think that Jim was right to be outraged that the president was declaring the free press the ‘enemy of the people.’ I was too. He expressed it in a more pointed way and I respect that. And frankly, if I was writing the book right now, I would probably write a little bit differently about Jim. I understand fully where he was coming from. I wouldn’t have done it in the same way, I didn’t do it in the same way, but I understand where he was coming from.

Mediaite asked Karl about the next incoming president, whenever that is, and whether the “harm done” by Trump’s attacks on the press will subside.

“I do think that that the pendulum will swing. God, I hope it will. And we will get back to, you know, more normal relations between the press and the people we cover,” he said.

One thing he hopes will return? “The idea that the White House press secretary is a public servant and not a political operative.”

“You are not Baghdad Bob if you are the press secretary for the White House,” Karl said. “If you are, you are undermining our democracy.”

Some would say men like Mike McCurry and Joe Lockhart were “Baghdad Bob” for Bill Clinton, denying the obvious about his reckless mistreatment of women who were not his wife. But McCurry hosted a book chat for Karl earlier this year at Washington’s liberal bookstore/salon Politics & Prose.