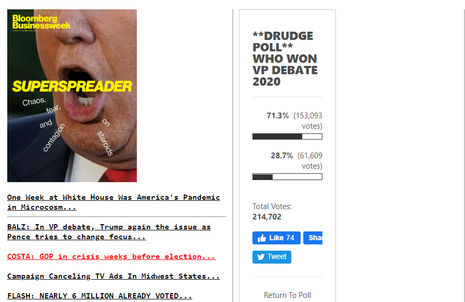 Imagine a poll that shows you the mathematical results but lacks the names associated with those results. Well, you don’t have to imagine that absurd scenario since it happened in real life on Thursday with the Drudge Report poll (under the Drudge banner) showing the results but, amazingly, not the names of the whom the readers thought won Wednesday’s vice-presidential debate between Mike Pence and Kamala Harris.

Could the absurd lack of any names in the poll results be due to the fact that Mike Pence was so far ahead at 71% to 29%? It has been known for some time now that Drudge has become extremely anti-Trump but not revealing the names associated with the lopsided poll reveals how far gone his over the top bias has become.

The names were gone late Wednesday night and into the early hours of Thursday. In addition, he deceptively had the name of Kamala Harris at the top of when you vote while showing the results with the lopsided win number on the top as well without the name as if to make the readers think that number was associated with Harris. Did he think people would somehow not notice this ridiculous situation?

How liberal has Drudge gotten? The site is now getting admiring stories from The New York Times. Here’s the paper on October 1, 2020:

Something has changed at Drudge Report, the influential site known for its tabloid-poetry headlines and conservative take on the news, and don’t think the president hasn’t noticed.

For anyone who had not stopped by the site since it developed a reputation for lifting Mr. Trump and his brand of conservatism, the welcome page on Monday made for an arresting sight. At the top were images of stickers being sold by the Biden-Harris campaign that read, “I paid more income taxes than Donald Trump.” Below that appeared a scroll of headlines linking to news stories from various sites, all of them written in Mr. Drudge’s staccato style, many of them related to a New York Times investigation of Mr. Trump’s troubled financial history.

The Drudge Report was once a highly respected site for news. That it has fallen so low to the extent of actually removing the names from a poll with results that don’t coincide with his new anti-Trump attitude is just a sad example of how much credibility it has lost.