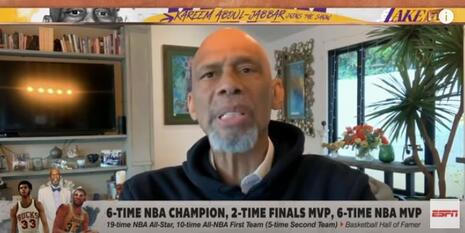 embarrassing TV ratings collapse, Kareem Abdul-Jabbar and Jason Whitlock offered competing evaluations of the face of the league: LeBron James. Writing for The Guardian, Abdul-Jabbar used a Mount Rushmore analogy to describe James as the personification of the modern-day woke athlete. In an Outkick video, Whitlock called James a turn-off, “crass” and “crude” and says the NBA needs to find a more positive marquee player.

Though many NBA social justice warriors were active this season, the finals put the focus on James as the symbol of the merging of athletics and ethics, says his apologist, Abdul-Jabbar (seen in photo praising James on ESPN Tuesday).:

“Watching LeBron’s chiseled Mount Rushmore face of determination as he displayed a dazzling blend of agility, grace, power and surgical skill that clearly amped up his teammates to push themselves harder and higher showed he deserves every accolade he gets. But his unwavering willingness to continue to convince the disillusioned and disenfranchised why they need to vote, makes him the embodiment of this NBA championship triumph.”

Whitlock’s take on James is the polar opposite. He said during an Outkick broadcast with Clay Travis that James is “crude, crass and unsophisticated, and all of the things that he allegedly dislikes about the president are actually true about him.”

Though Abdul-Jabbar waves off the NBA’s dismal ratings by saying the league was competing against other sports, Whitlock blames it squarely on the league for mistakenly making James its focal point.:

“He’s (James) run off a significant segment of basketball fans. It’s just not a good look for his legacy, and if I were ESPN, TNT, and advertisers that are tied to the NBA I would be very concerned.”

Whitlock advises the NBA to back off the politics that created animus and division among fans and the glorification of criminals involved in altercations with police. On the other hand, Abdul-Jabbar put his lofty head in the sand and praised the league for its “expression of social responsibility …” and turned his wrath on conservative detractors.

President Donald Trump tweeted that “People are tired of watching the highly political @NBA. … ” and Sen. Ted Cruz (Rep-TX) not only boycotted the NBA all season, but also tweeted the hashtag “GoWokeGoBroke”.

Abdul-Jabbar responded to Republican criticism by writing, “That really says everything you need to know about the character – or lack thereof – of both men: Never speak out against injustice if it costs you money. These are the sentiments of people born to collaborate with the enemy. …”

“It’s bad enough that Trump and Cruz show such a lack of moral leadership that equates ethics with popularity (think which side they’d have been on when slavery, women not voting and killing witches were all popular), but they also are just wrong about weak ratings being a result of rejecting the message. Because of the pandemic, many sports are competing against each other on TV for the first time ever, and it’s affecting all their ratings. …”

Abdul-Jabbar didn’t help his weak defense of the NBA and James any when he said 26 million people (many of them law-breaking hooligans) — five times as many people who watched this year’s final NBA game on TV — protested the death of George Floyd. Yes, the NBA is so NOT compelling that many more people would rather engage in looting and arson than watch it. And if Bron Bron is the personification of the modern athlete … then God save the players!