It didn’t take long for billionaire and failed presidential candidate Tom Steyer to resume peddling his climate change nonsense. This comes after he spent over $341 million financing his own campaign. 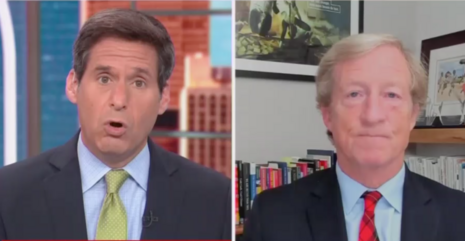 His new schtick? Selling the American people that the only way to stop West Coast wildfires is electing Democratic presidential nominee Joe Biden.

Insufferable CNN anchor John Berman first allowed Steyer to drone on about his coinage of the term “climate fires.” Berman then pivoted to actually questioning how natural disasters will affect the November election if they happened in “states that mattered.” Berman asked during the September 14 edition of CNN’s New Day, “What if this were happening in states that mattered in the electoral college?” After saying that “we all know that this is a global issue of climate,” Steyer then took a detour into lunacy: “This is crying out for national and international leadership. The number one thing we can do is elect a different president.” Steyer sunk himself further: “[T]he only solution we have to this problem is — honest to God — Joe Biden.”

Ah, so the key to our “climate” woes is politics, eh Steyer? Who knew.

Watch the entire segment below:

Berman later teed up Trump for the signature CNN anti-Trump attack for not acknowledging “climate change” as a factor for the wildfires: “ And Donald Trump, who will be in California today, has not acknowledged the role that climate change has played in the blazes. Instead [he] blames forest management. And some of that blame may be misplaced as to the specifics of it.” Berman then asked Steyer: “[W]hat role does forest management have in trying to mitigate these blazes?”

Steyer deflected away from the question: “Mr. Trump is playing politics by denying the issue and then saying, ‘we’re not dealing with the problems. We’re not adapting to this.’” Steyer then shifted blame to Trump for California’s wildfire problem: “In fact, the federal government, run by Donald John Trump, owns half of California. So if there’s somebody who’s not sweeping the floor in California, it’s Donald John Trump.”

This is misleading. It is true that the “federal government owns nearly 58 percent of the 33 million acres of forestlands [in California].” However, Commentary Magazine Associate Editor Noah Rothman wrote: “[t]he patchwork of federal, state, local, tribal, and private interests that are responsible for forestry management have run up against the state’s onerous regulatory environment.” [Emphasis added.] Rothman noted that a “2018 study conducted by the California Legislative Analyst’s Office found that ‘overcrowded forests’ have contributed to the increased death of vegetation from stress and disease, resulting in a glut of combustible fuels on the forest floors.”

Climatologist Dr. Roy Spencer also wrote in November 2019 that “When you add the increasing population, risky forest management practices, and lack of maintenance of power lines, it should be little wonder that wildfire activity there has increased.” On the question of climate change, Spencer wrote: “I think it is a mistake to blame increased wildfire activity on ‘climate change’, when we don’t even know if there has been a change in the meteorological events most associated with major California wildfires: the intrusion of cool Canadian high pressure areas into the U.S. Southwest.”

Contact CNN at 1-(404)-827-1500 and demand it stop infusing climate change propaganda into its reporting.