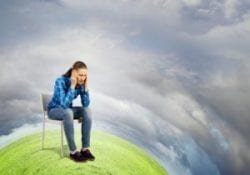 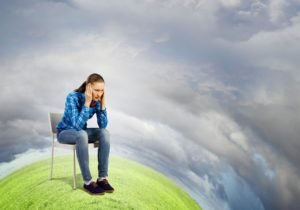 A real dilemma or an excuse not to function?

We have created a generation of marshmallows. Do you remember the videos of people simply gathered together to scream uncontrollably after Donald Trump won in 2016? We now need Quiet or Safe Rooms on college campuses so weak-minded students can escape reality until their heart rates return to normal. These are the young people who will be leading our country into the future….we are in deep trouble.

Eco-Anxiety is the latest in the new terms to describe just how mentally and emotionally strained our young people are or at least think they are. There is no actual scientific data to support these “diseases” but they take on a life of their own. They get hyped on Social Platforms and then the Media gets onboard and somehow, that gives these ailments credibility. Once that happens, the epidemic begins……Yeah, eco-anxiety……I think I have it too! It becomes hip or fashionable to be one of the victims.

Victimhood may not be a word but has become a way of life. It delays or replaces the need to be a part of reality. It allows you to escape responsibility and to be dependent on others as you are “recovering” from a wicked, imaginary, debilitating situation that has taken control of your mind and body. Notice the operative word, imaginary.

I am not belittling anxiety. God knows this past year, and the drastic changes that it has dropped on us, has absolutely taken a mental and emotional toll on every one of us. Worries about health, finances, security, friends, and family are real. We could never have imagined that on March 12th of 2020, the world was going to hit the pause button and we had to hunker down in our own personal bubble. Kind of reminds me of the old game Red Light we played as kids…….one, two, three RED LIGHT……Freeze! That was a game but the impact of the Pandemic is real and the mental, emotional toll did perpetuate into physical issues. This is impacting us all and it is not imaginary.

Eco-Anxiety is not real. It is a creation of people who are using fear to advance an agenda. I heard a clip from a young woman who described her Eco-Anxiety as Fear, Dread, and Panic. She was a perfect example that the efforts of these people like John Kerry, AOC, Greta Thunberg are working. Is there Climate Change? No doubt, but there has been a changing climate for centuries and it has shown to be cyclical. There are no empirical facts that we are looking at impending doom in the next 10-12 years as spouted by AOC. Even the Obamas, who were driving the Climate Change Wagon, cannot be true believers that the water levels are rising and our shorelines will be destroyed or they never would have bought a $12 Million dollar mansion on the shore of Matha’s Vineyard. Just remember that Climate Change was once called Global Warming until it was debunked.

Would you buy this home if it were going to be underwater in 10 years? Didn’t think so.

We cannot feed into this thinking. We cannot be insensitive to reality but we need to be able to detect the difference between actual mental and emotional distress and an imaginary impediment. If imaginary, then it deserves tough love……suck it up and deal with life. There are certain words or terms that get so miss or overused that they become irrelevant – racist, bigot, misogynist, and sexist fall into that category. Let’s hope that Eco-anxiety joins the ranks sooner than later. Maybe then those who are claiming to be victims can pull themselves together and find a way to be productive members of society rather than a victim of it.

Eco-Anxiety…Are You Kidding Us? is original content from Conservative Daily News – Where Americans go for news, current events and commentary they can trust – Conservative News Website for U.S. News, Political Cartoons and more.