EMBARRASSING: Paul Krugman Contradicts Himself Claiming Biden ‘Has No Control’ Over Gas Prices 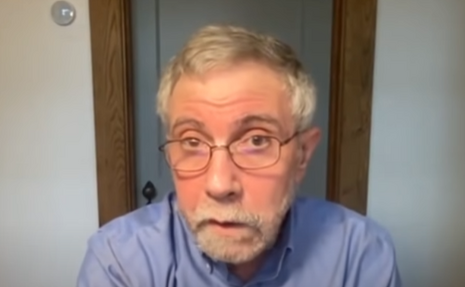 Krugman took to Twitter to try to explain away the abysmal election results for Democrats Tuesday in an attempt to protect Biden: “One issue that seems to have influenced voters Tuesday was the price of gasoline — over which Biden has no control.”

But Krugman went after Trump in 2020 over his alleged control over the price of oil, which affects gas prices. “Crude oil prices have determined at least half of the price of each gallon of gas over the last decade,” according to The Balance. “Why is Trump so desperate to raise oil prices, even though America is a net oil importer?” Krugman griped in an April 2020 tweet. In another April 2020 tweet, Krugman sniped at “Trump’s eagerness to raise oil prices, supposedly to protect a much smaller number of jobs.”

Why is Trump so desperate to raise oil prices, even though America is a net oil importer? 1/ https://t.co/AphgqCf00o

Aside from the clear hypocrisy, Krugman is wrong. Environmental Progress Founder and President Michael Shellenberger ripped Krugman’s argument that Biden had no control over gas prices as “ridiculous” and “absurd.”

Paul Krugman says voters shouldn’t be mad at Biden because he has no control over the price of gasoline, but that’s absurd: the US is the world’s largest producer of oil; Biden froze new oil/ gas leases in January; and he may open the Strategic Petroleum Reserve to lower prices. https://t.co/IrlyvquS5N

As Shellenberger pointed out on Twitter, “the US is the world’s largest producer of oil; Biden froze new oil/ gas leases in January; and he may open the Strategic Petroleum Reserve to lower prices.” Shellenberger proceeded to note in a corresponding Tweet that “Biden doesn’t agree with @paulkrugman that he’s not capable of lowering oil prices. Biden has been pressuring OPEC to produce more for weeks[.] But, as Bloomberg’s @JavierBlas notes, Saudi Arabia & Russia are producing at or above pre-covid levels & ‘it’s the US who’s lagging.’”

U.S. producers have also been slower to revive output as the Administration is threatening the oil and gas industry with a panoply of taxes and regulation. Producers aren’t going to drill more wells today, even at today’s higher prices, if they don’t think they will produce future profits.

Canary CEO Dan Eberhart wrote in an August op-ed for Forbes that Biden was “actively curbing U.S. [oil and gas] production through his dedication to rebuilding the regulatory state that former President Trump tried to dismantle.”

Krugman somehow managed to be both hypocritical and wrong in the same tweet.

Conservatives are under attack. Contact The New York Times at 800-698-4637 and demand it report the truth about Biden’s contribution to rising gas prices.