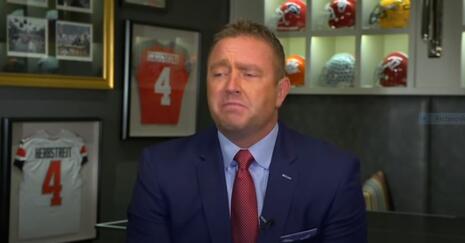 There was no shortage of white guilt TV over the Labor Day weekend. CBS Sports aired a five-hour program on racism and society, titled “Portraits In Black” on Sunday afternoon. On Saturday morning, ESPN’s College GameDay went heavy on social justice, too.

As a matter of fact, Sean Keeley’s Awful Announcing story called the emotion-ridden GameDay broadcast one of the truly memorable moments in the program’s 33-year history. All because of Kirk Herbstreit’s impassioned, emotional remarks on the state of social injustice in America, “specifically when it comes to the injustices faced by Black college athletes and Black Americans in general.”

There may be no crying in baseball, but there is in sports media. A sniffling Herbstreit, who broke into tears, said it is incumbent upon white college football players to help facilitate change in America:

The black community is hurting. If you’ve listened, (you’ve heard) the word empathy and compassion over the last four months. How do you listen to these stories and not feel pain and not want to help? You know what I mean? It’s like…wearing a hoodie and putting your hands at 10-2…Oh god, I better look out. I’m wearing Nike gear, like what? What are we talking about?

You can’t relate to that if you’re white but you can listen and you can try to help because this is not OK. It’s just not.

Keeley excused Herbstreit’s meltdown by calling it “refreshing as there’s a propensity for men in his position (and sport) to be tough and not show emotions. Herbie has a lot of sway with college football fans across the country and being able to honestly convey his feelings and emotions on this platform is something viewers won’t soon forget. Hopefully, the actions that Kirk is calling for will follow.”

The Awful Announcing writer got it right when he said viewers don’t tune in to ESPN to see hosts go snowflake and cry. But he got it wrong by writing “such is the condition of the country at the moment. We all know that ‘stick to sports’ is dead and buried, but we’re at a juncture where the idea that sports are some kind of ‘escape’ from what happening in the world is a disservice to those who play the games and the media members who cover them.”

No, it’s a disservice by athletes and media to use their work place to impose controversial and insulting opinions, like so-called systemic racism, on paying customers.

James Brown hosted the CBS Sports marathon and told Awful Announcing’s Shlomo Sprung he is concerned about what’s happening in the country today. Nevertheless, CBS Sports started out by going far back into history to demonstrate white racism.

The first hour of the CBS program went back 53 years in time to examine racism in the Deep South in a feature on Nate Northington, a University of Kentucky football player who was the first Black player in the Southeastern Conference.

Then “Portraits In Black” went back 50 years to “The Black 14” — a story about minority football players who were dismissed from the University of Wyoming football team for wanting to wear black armbands in an upcoming game against Brigham Young University. They wanted to protest the Mormon church’s refusal to allow African Americans to serve as clergy.

CBS Sports saved the Black Lives Matter movement and white guilt for the latter portions of the program. The Milwaukee Bucks three-point specialist Kyle Korver, was featured in a discussion with black teammate George Hill. A native of white, rural Iowa, Korver has been a favorite of the Left ever since beating himself up for his white privilege in a post on The Players Tribune. In that post, he said that, as a white man, he is part of systemic racism and responsible for the sins of the forefathers.

Brown rationalized that equality has been a problem in America for 400 years plus and is “not just a societal problem that affects things in business or government or academia. It runs the entire spectrum, and we’re showing it through the lens of sports.”

And through the lens of teary-eyed snowflake sports analysts.