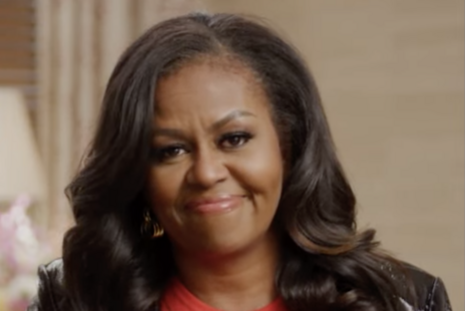 Michelle Obama, the media-hogging former first lady who just can’t resist having her face on books, Netflix specials, icky school lunch programs, and PBS children’s programming, is now adopting an air of humility about the upcoming portrayal of her in a Showtime series about history’s favorite first ladies.

In a recent interview with Entertainment Tonight, the wife of Former President Obama and spotlight chaser who couldn’t find a daytime talk show audience she wouldn’t do an awkward shimmy for, claimed to feel “unworthy” of being played by Hollywood A-lister Viola Davis. Suuuuuuure.

While doing the press rounds to promote her latest Netflix show, Waffles + Mochi – a series about Michelle and her puppet friends named Waffles and Mochi telling kids about world cuisine – Obama gushed about Davis filling her shoes in the upcoming Showtime series, The First Ladies.

“Viola Davis is the greatest, OK? I feel that I’m not worthy,” Mrs. Obama told ET.

Yeah, well perhaps it is dawning on Michelle that a high profile Hollywood series including her as one of three of the more remarkable first ladies in history might be a bit too flattering. After all the series, called The First Ladies, is posturing Michelle next to First ladies Eleanor Roosevelt and Betty Ford in some sort of iconic treatment.

Showtime first announced The First Ladies in February 2019, and in addition to stating that Davis would be playing Obama, the network stated that Michelle Pfeiffer would be playing Ford and that Gillian Anderson would be playing Roosevelt. The series aims to show a “a revelatory reframing of American leadership, told through the lens of the women at the heart of the White House.”

No offense to Michelle and her efforts to make kids thin by increasing their lunch room suffering, but couldn’t Abigail Adams or even Jacqueline Kennedy have rounded out the three? Though whatever, Michelle is so puffed up by the media, that for the left she is THE first lady. Ford and Roosevelt might as well be filler material for the series.

Obama continued to praise the lady who will make her look good on camera: “Anything Viola does, she does it with passion and vigor, and I know she will do no less for this role.” Ah yes, because portraying a First Lady who – rumor has it – enjoys scoffing at the American flag, requires “passion and vigor.”

Of course Michelle may have also felt compelled to return the favor for Davis’ butt-kissing during her own interview with ET back when the show was first announced. Davis had told the outlet, “She’s smart. She’s confident. She’s articulate. She believes in sisterhood … I wanna honor her. I wanna honor her with this portrayal because that’s what drama is.”

Davis also added, “That’s what we do as actors, we want to honor the human being. We don’t want to give a portrayal that isn’t easy for people to swallow.” So Davis admitted that the priority is making Michelle look good. So this is going to be just another Hollywood puff piece isn’t it?