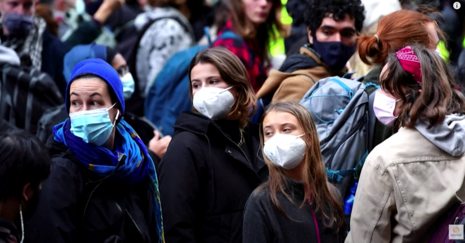 Thousands of climate activists from across the world have descended this week on the Scottish city of Glasgow, demanding that nations gathering for a global climate conference produce real, meaningful change.

And some of the strongest and most urgent calls for action have come from young protesters who claim that the world they are inheriting is teetering on the brink of a climate catastrophe.

They have spent the week disrupting talks held by gas giants, and staging theatrical spectacles on the fringes of the international event, known as COP26. But the protests will crescendo on Friday and Saturday in two days of demonstrations expected to draw up to 100,000 people.

A familiar face turned up:

The youth-led climate strike was organized by Fridays for Future, the international movement that has grown out of Greta Thunberg’s solo school strike that began in 2018.

Ms. Thunberg, whose strike inspired young people the world over to take action on climate change, was met with cheers as she spoke to the crowd following the march….

Every flavor of left-wing activist was represented, though the reporters strove to make it sound grassroots.

Glasgow residents lined the streets to watch the colorful spectacle pass by, as children clutched hand-drawn signs reading, “Stop deforestation,” “Save the planet!” and “Act now.”

The Times itself captured images of signs that read: “Capitalism + Colonialism = Climate Crisis,” suggesting this movement isn’t based so much on principled concern by the young for the environment as it is left-wing groups smuggling in anti-capitalist ideas under “green” protection. But the paper barely acknowledged the broad left-wing messaging.

The young activists say they want more than just reduced emissions: They would also like an acknowledgment of the systemic issues intertwined with climate change response, including inequality and poverty. They want solutions that work for everyone and that help dismantle racism, sexism and the neglect of developing nations.

The reporters missed an easy chance to note the hypocrisy of an international conference hinged on the supposed emergency of climate change, producing carbon emissions in the form of private jet travel for attending leaders.

The presence of environmental activists at COP26 itself has been muted because of pandemic restrictions, as well as difficulty in obtaining vaccines, visas and affordable accommodations, leaving some unable to attend.

The Britain-based COP Coalition, an umbrella group of climate activists and organizations, has labeled the conference the “least accessible climate summit ever,” pointing to chaotic crowding and some delegates being told to dial into the meeting from hotel rooms.

But wouldn’t a remote conference be both COVID-safe and environmentally friendly?

This is far from the paper’s first foray into impressing children into the battle against “climate change.” A July 2018 Times story read like a press release, starting with the headline: “Teenagers Fight Climate Change, From the Front — Meet the Leaders of a National Movement Called Zero Hour.”