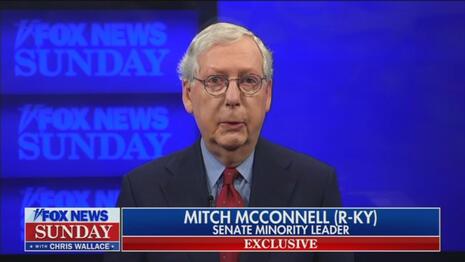 Boy does this sound familiar. Facebook allowed far-left group Shut Down DC to send protestors to the doorstep of politicians and even buy advertising to spread the word.

It’s one thing to give Big Tech companies the benefit of the doubt, knowing they can’t vet everything on their platforms. But Facebook allowed Shut Down DC to organize an event harassing U.S. Senate Minority Leader Mitch McConnell (R-KY) at what is purportedly near his home address, and even buy advertisements for the event.

Shut Down DC organized an event via Facebook called “The People’s Filibuster,” proclaiming that protesters will “be right down the block from Minority Leader Mitch McConnell’s house (and making plenty of expeditions over there) for 25 hours straight.” The event page shared the address allegedly near McConnell’s residence where activists coordinated to “filibuster” his home.  Facebook’s rules forbid users from even “threatening to release an individual’s private phone number, residential address or email address.” Shut Down DC explained the organization’s liberal laundry list of goals for the event: “We’re showing up for voting rights, DC Statehood, climate action, healthcare and everything else our communities need. Come talk about what speaks to you!”

A screenshot obtained by Free Speech America showed a sponsored ad from Shut Down DC on Facebook labeled as “sponsored” content complete with a label indicating it was “Paid for by ShutDownDC.” 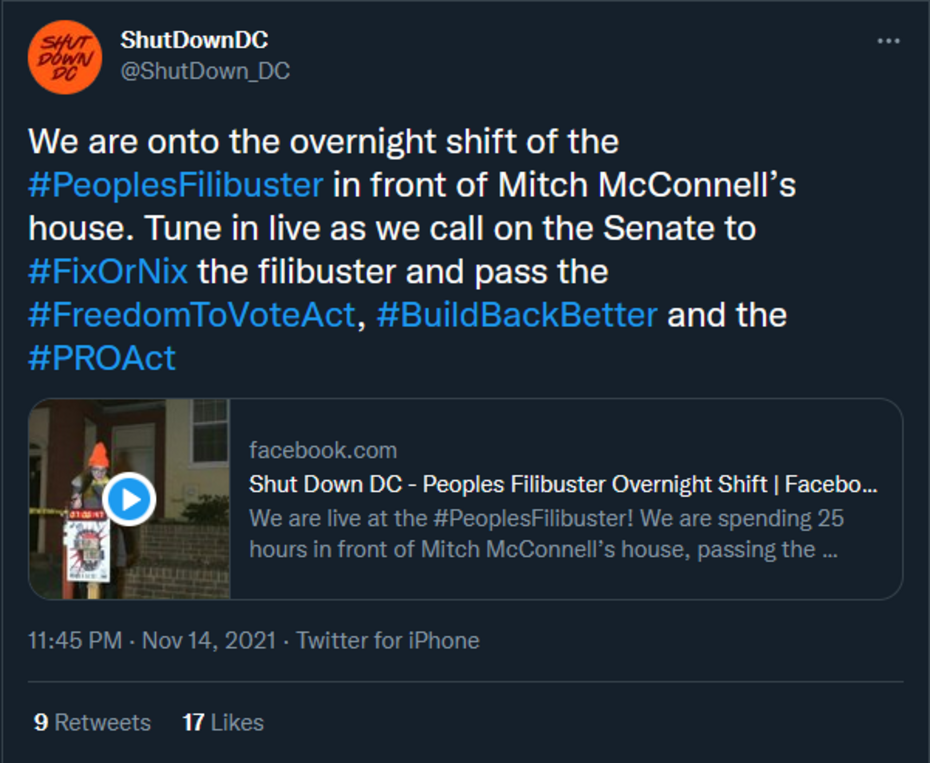 Other tweets showed footage of multiple activists rapping in front of McConnel’s presumed residence. Facebook even allowed the event to be livestreamed, which Shut Down DC acknowledged to be “25 hours in front of Mitch McConnell’s house, passing the record for the longest filibuster in United States Senate history.”

Facebook has a history of tolerating groups using suspect tactics.

Facebook allowed leftists to share an event to harass a U.S. senator this past October. Green New Deal-supporting Sunrise DC tweeted, “start the week off right by yelling at Joe Manchin” earlier that same month. The same tweet shared another, entirely separate Facebook event by Shut Down DC earlier in October proclaiming: “So we’re going back to Manchin’s yacht at the Wharf,” complete with a map/address.

Newsweek summarized Sept. 21, 2020, that “Protesters on Monday gathered outside South Carolina Senator Lindsey Graham’s house to ‘wake him up’ over his push to quickly replace Supreme Court Justice Ruth Bader Ginsburg, who passed away Friday.” Facebook allowed both Shut Down DC and Sunrise DC to organize the protest via a Facebook event page. The event page that listed Graham’s purported address and called upon supporters to protest at the senator’s house has since been deleted. Meanwhile, both organizations are still allowed to remain active on the platform.