Frances Haugen, the Facebook whistleblower, is a far-left activist and AOC donor, The Daily Wire reports. 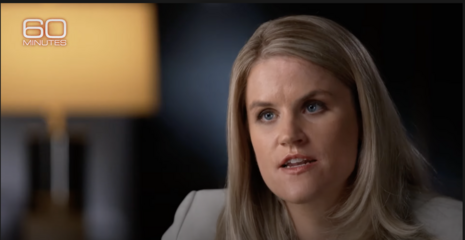 In an interview with “60 Minutes,” Haugen, a data scientist and former Facebook employee who worked to combat so-called “misinformation,” said the platform bears some responsibility for the Jan. 6 riot.

“Facebook, over and over again, has shown it chooses profit over safety,” Haugen said. She said she hopes that her testimony will encourage the government to put more regulations on Facebook.

According to The Daily Wire, Haugen has a record of donating to far-left politicians like Alexandria Ocasio-Cortez.

“She is working with Democrat operatives to roll out her complaint and has the same lawyers as the anonymous Ukraine “whistleblower” whose allegations led to Donald Trump’s impeachment, but who reportedly turned out to be then-Vice President Joe Biden’s top advisor on the country.”

She also seems to have a history of accusing her employers of being biased, saying “if we don’t build with an eye towards inclusion, we can end up enshrining bias.”

In 2015, she accused Google of not being inclusive enough of women in the workplace.

“I didn’t realize the way I had been worn down by being a woman in tech… the last team I was on at Google, it had a transsexual Eng[ineering] director, and as a result we had more transsexual women than cis women on our team, which also says something sad about the number of women in tech,” she said.

She is also apparently represented by lawyers who represented the anonymous Ukraine “whistleblower.”

Conservatives are under attack. Contact Facebook headquarters at 1-650-308-7300 and demand that Big Tech be held to account to provide clarity on “hate speech,” rules that seem to be applied inconsistently. If you have been censored, contact us at the Media Research Center contact form, and help us hold Big Tech accountable.