The Girl Scouts of America can’t bring themselves to recognize the accomplishments of one very successful woman, SCOTUS Justice Amy Coney Barrett. Apparently, only Democrat, pro-choice, and/or non Trump-appointed judges are GSA material these days. 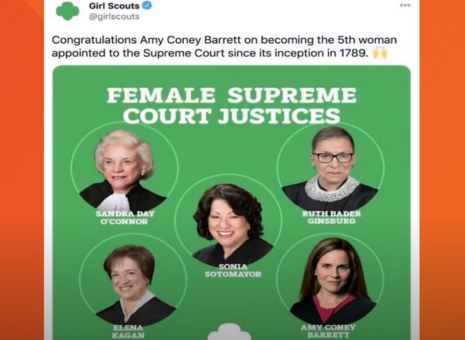 In an ironic twist, the Girl Scouts have pulled a Twitter post congratulating Amy Coney Barrett on her Supreme Court Confirmation which occurred on October 26. Even though Barrett is a woman who has reached the summit of the legal field, all while raising a family of seven kids, her political affiliation seemed to cancel her tremendous successes in the eyes of the nation’s seminal girls’ club.

But of course, the Girls Scouts have a Ruth Bader Ginsburg patch. Keep in mind this makes them even more petty than President Trump, who has gone out of his way to admire Ginsburg’s achievements as a woman despite his administration opposing her on policy.

On October 28, Girl Scouts of America’s Twitter account apologized for sharing a picture celebrating the five female SCOTUS Justices in American history earlier that day. The problem was that this post included conservative Trump-appointed Amy Coney Barrett. The tweet also explained that they had removed the tweet because of its “political and partisan statement.”

The first of two tweets on the controversy stated, “Earlier today, we shared a post highlighting the five women who have been appointed to the Supreme Court. It was quickly viewed as a political and partisan statement which was not our intent and we have removed the post.”

The most ridiculous statement concerning the post’s removal was GSA’s subsequent tweet, which stated, “Girl Scouts of the USA is a nonpolitical, nonpartisan organization. We are neither red nor blue, but Girl Scout GREEN. We are here to lift up girls and women.” 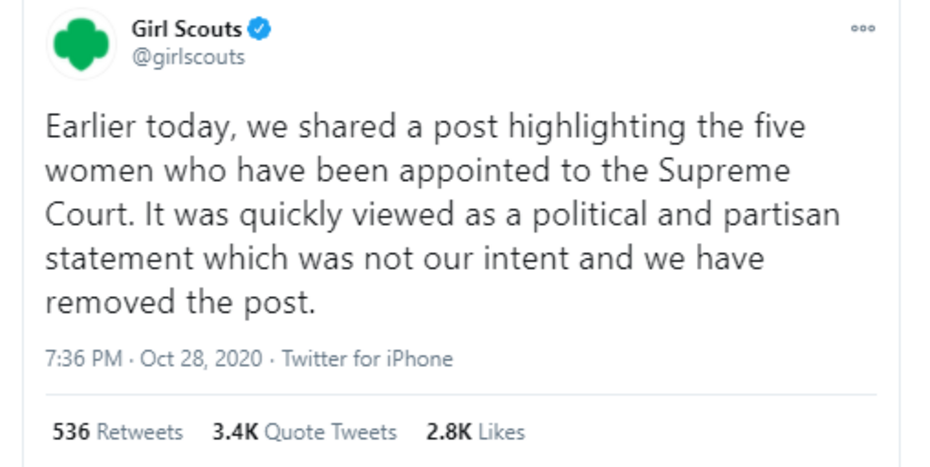 Earth to the Girl Scouts, deleting the post was the moment it became partisan and political.

Again, the earlier tweet appeared to merely celebrate the justices as accomplished women of American juridical history. California state Senator Melissa Hernandez (R-CA) tweeted a screenshot of the post after it had been deleted. It included a photo of the five women who have served on the bench since 1789. The group’s now-deleted tweet stated, “Congratulations Amy Coney Barrett on becoming the 5th woman appointed to the Supreme Court since its inception in 1789.”

Yeah, real political. Hernandez captioned the tweet, writing, the @girlscouts deleted this tweet because the mob came after them for daring to include Amy Coney Barrett. So much for teaching girls empowerment and inclusion.”

We all know how overtly left the Girl Scouts have become in the last several years, having aligned themselves with the worst of new wave feminist interests like unfettered abortion rights, and weird LGBTQ dogmas. Why on earth would they even celebrate Amy Coney Barrett? She represents everything they hate, (which ironically means they hate many things concomitant with being a woman, like having children.)

But then again, if you’re trying to be the Girl Scouts, can’t a polite “You go, girl!” still apply to Justice Barrett? She didn’t acquire a SCOTUS seat in a vacuum. It came from her excelling academically and professionally her entire life. Nope, GSA only recognizes women who think like them.