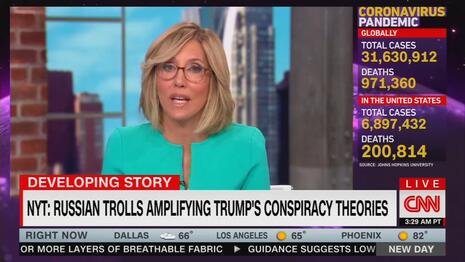 It could seem that the country is stuck in a time loop with CNN’s New Day once again wailing about Russian interference in a presidential election. John Berman and Alisyn Camerota gleefully discussed the FBI’s press release during Wednesday morning’s show. According to them, if you read between the lines, “it almost sounds as if the FBI is saying, don’t listen to the President.” If you look between the lines, you can see their liberal bias.

The FBI’s report did state that there’s a potential threat of foreign interference in the 2020 presidential election. The Bureau gave several helpful recommendations on how to find good information on the election such as fact checking, primary sources, and government officials. It was not their recommendation to ignore President Trump, he was not even mentioned in the report.

Camerota touted CNN political and national security analyst David Sanger hyping the debunked Russian collusion narrative on The New York Times website yesterday: “Your reporting spells out in vivid detail how these Russian trolls last time around in 2016, had to kind of use their creativity to sow division and come up with conspiracy theories. Not this time! They’re just taking a page from President Trump’s Twitter feed.”

The report does not spell it out clearly, instead it makes unfounded accusations against the President and claims that his concerns about election security were baseless and fantasies. Sanger whined to Camerota: “You know, life’s pretty good right now if you’re a Russian troll. You’re working from home and the President is coming up with much of your material.”

Berman then wildly claimed: “The FBI, to an extent, David, is trolling the President and telling voters, you can’t listen to what he’s saying right now, because he’s misleading you.”

The hosts of New Day outright dismissed the President’s concerns about election integrity. The Heritage Foundation released a report discussing the valid concerns with the election given the changes that have been advocated by Joe Biden and the Democratic Party. These include how the ballots are going to be verified, voting in person, and the possibility of hundreds of thousands of absentee ballots being thrown out on both sides. Just because there is some misinformation, does not make all these legitimate questions false.

Berman and Camerota seemed more interested in spreading their own propaganda and misinformation about the President rather than reporting on the election and concerns that have arisen. One does not have to read between the lines to see CNN’s clear commitment to pushing the Democratic Party agenda.

This anti-Trump propaganda was sponsored by Land Rover and IHOP. Click on the links to let them know what you think.

A transcript of the September 23 broadcast can be found below:

JOHN BERMAN: Also new this morning, we have new guidance from the FBI, raising alarms about disinformation on the integrity of the election. And if you read between the lines here, it almost sounds as if the FBI is saying, don’t listen to the President. The FBI warns specifically of, quote, the spread of false information in an attempt to discredit the electoral process and undermine confidence in U.S. Democratic institutions. Honest to god. It almost sounds like they’re saying what the president is saying, pay no attention.

ALISYN CAMEROTA: Could that possibly be their message?

ALISYN CAMEROTA: There are new details this morning about Russian efforts to interfere in the upcoming U.S. Presidential election. The New York Times‘s David Sanger reports in, quote, in interviews, a range of officials and private analysts say that Mr. Trump was feeding many of the disinformation campaigns they were struggling to halt and rather than travel the back roads of America searching for divisive issues, as three Russians from the internet research agency did in 2013, they are staying home, grabbing screen shots of Mr. Trump’s Twitter posts or copying his misleading statements and amplifying those messages. Joining us now, is CNN political and national security analyst David Sanger and Anna Palmer, Politico’s senior Washington correspondent. David, your reporting on this is so stunning. Sometimes I think that all the Russian interference can kind of fall into a morass for Americans mentally. We’ve heard it before. It’s hard to know what the nuances are. Not this time! Your reporting spells out in vivid detail how these Russian trolls last time around in 2016, had to kind of use their creativity to sew division and come up with conspiracy theories. Not this time! They’re just taking a page from President Trump’s Twitter feed.

DAVID SANGER [CNN Political Analyst]: Well, yes, Alisyn, that’s pretty much the sum of it. You know, life’s pretty good right now if you’re a Russian troll. You’re working from home and the President is coming up with much of your material. You know, yesterday, the FBI and the Department of Homeland Security’s Cyber Division turned out a warning that said that people should be aware come election day that there may be a lot of false reports led by foreigners on the internet about paper ballots, about delays, about power outages, internet outages, attacks that would be exploited if there was a long recount. But where have we been hearing that recently? It’s all coming out of the President’s own tweets. And what’s remarkable as we went through a lot of what the Russians have been re-broadcasting on RT and Sputnik and their other channels, what they’ve been tweeting and putting up on Facebook is that they’re sort of taking this and amplifying it, sending it back into the digital bloodstream of America, and then it just starts getting spread around, by real Americans, so that the Russians no longer get thrown off of social media for inauthentic behavior.

JOHN BERMAN: The President is doing their job for them. That, I think, is what your report largely says. And I was fascinated by what the FBI and Homeland Security put out yesterday. Because although they frame it and what foreign actors might do, the subtext seems to me that you have to be careful listening to the President of the United States. Let me read to you from the statement. This is the FBI warning. Foreign actors and cyber criminals could exploit the time required to certify and announce election results by disseminating disinformation that includes reports of voter suppression, cyber attacks, voter or ballot fraud and other problems, intending to convince the public of the election’s illegitimacy. Well, that’s already happening. And it’s happening from the President of the United States, not to mention, his son, Don Junior, who almost literally said, you can’t trust the election results yesterday. So it seems to me, you talk about trolls. The FBI, to an extent, David, is trolling the President and telling voters, you can’t listen to what he’s saying right now, because he’s misleading you.

SANGER: John, it’s a little bit of a dangerous game for them. Because you may remember that it was just last week that Christopher Wray, the director of the FBI, was up testifying in congress. And he was asked about election threats and he put Russia first and barely mentioned China and Iran, which are long distance, second and third rate players in the election space. And what ended up happening was the President himself went after Wray on Twitter that evening, saying, you’re always doing Russia, Russia, Russia. What about China, what about Iran? So what he’s trying to do is not only feed the topic matter, which is getting repeated, but he’s also trying to make the argument that Russia’s no different than other players. And while certainly others are learning from the Russians, the Russians are in a league of their own, John.