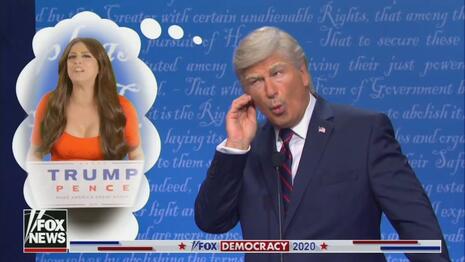 Abbey White at The Hollywood Reporter relayed that Alec Baldwin took to his Instagram account on Sunday to defend the audacity of mocking President Trump getting the coronavirus on Saturday Night Live.

It wasn’t “mocking somebody’s illness” by suggesting that it was Science and Karma combining together? [Insert the audience of liberals screaming and laughing.]

Baldwin doesn’t think he’s mocking the sickness by his cartoonish Trump saying “The China Virus has been very mean to me by being a hoax, and that statement will not come back to haunt me later this week.” But he protesteth too much, by saying oh, you can’t imagine what gets proposed, but doesn’t air! 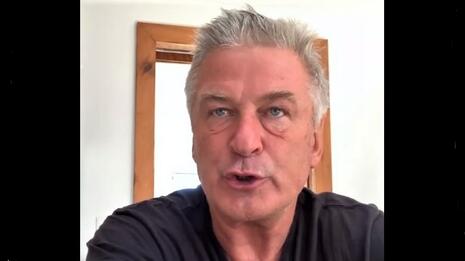 The perception that we’re mocking him because he’s sick. I’ve known these people for many, many years, and you wouldn’t believe the stuff that’s proposed – there are hard drives with tarabytes of material, there are boxes, there are countless binders somewhere in storage, out in New Jersey or in Brooklyn, in some facility with the sketches that were proposed that were turned down because they were deemed inappropriate. The stuff that gets turned down, you wouldn’t believe, some of the stuff that’s proposed, it’s outrageous.

“This is a group of people that are pretty savvy. They’re in network television, [SNL creator] Lorne [Michaels] is, you know, one of the smartest people in the business,” Baldwin said. “And the other people from the network who come and go but interact with him, they know that they don’t want to sink the ship.

“If there was ever the suggestion that Trump was truly, gravely ill, and people said, ‘Trump is really in trouble,’ then I would bet you everything I have that we wouldn’t even get near that, in terms of content of the show.”

So since Trump wasn’t in danger of dying, everything was fair game! Or as the show’s “Weekend Update” crew insisted, if Biden was sick, Trump would mock him, so we’re in the clear! It seems obvious that Team SNL knew its audience wanted a juicy debate skit with lots of Trump-whacking, and they didn’t want to disappoint their “base.” Baldwin calls that a “bright and fizzy” show-opener.

Toward the end of this video, as Baldwin ponders the next presidential term, he predicted “Blue cities, like New York, Los Angeles and Chicago” will need aid after the COVID pandemic. “Trump will asphyxiate those cities. He will destroy them. They’re going to need federal dollars!” He added senators from red states like Kentucky and South Carolina are “poised to kill New York, to kill Los Angeles, to kill Chicago, if they had the opportunity.”

PS: Baldwin’s playing classical music throughout most of his Insta-chat. He pretentiously announced about 90 seconds in that it’s the Brahms Piano Concerto in D Minor, Op. 15… “Sunwook Kim conducting the Staatskapelle Dresden and Myung Whun-Chung, who I love, playing the piano. I’m a big Myung Whun-Chung fan.”

Except! He has it backwards. It’s Myung Whun-Chung conducting, and Sunwook Kim playing the piano. (To be fair, Whun-Chung was a piano prodigy, like Sunwook Kim.)