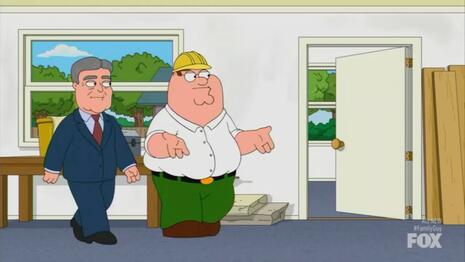 After the Griffins arrive at Doug’s house, Peter (Seth MacFarlane) says that building the tree house “is gonna be more work than when I built that Habitat for Sean Hannity.” The scene then flashes back to a memory of Peter and Hannity discussing the conservative host’s specifications.

Peter: Aw, man, this is gonna be more work than when I built that Habitat for Sean Hannity. As you can see, we’ve made everything white, like you requested. Here’s a room to recover from your sodium headaches, and on the walls, I painted some of your most famous quotes. There’s the one where you compared the homosexual lifestyle to playing in the sewer, and there’s the one where you defended Roy Moore.

Peter: Uh-huh. And here’s a room where you can blame things on an immigrant.

Hannity: Hey, nothing personal, I just peddle hate for money.

That dialogue is so eye-rolling it is sad. The attack on Hannity’s views on immigration and sexual ethics particularly missed the mark considering the country is facing an immigration crisis at the border and parents are having to fight off radical LGBT grooming in schools and the larger culture.

And are the writers so desperate to attack Republicans that they had to reach all the way back to a senatorial campaign from 2017 for the dialogue? No political issues occurring this year with Democrats that might be worthy of satire, Seth MacFarlane?

MacFarlane has made no secret of his hatred for Fox News and Family Guy has previously attacked other Fox News commentators such as Tucker Carlson. It leaves easily mockable hosts from CNN and MSNBC untouched. The show also spent years mocking Trump, often in the most vicious ways imaginable.

We currently have a U.S. president showing possible signs of dementia, with economic and foreign policy disasters practically every week, and the biggest political joke the season premiere of Family Guy bothered to write was a weak bit mocking a popular Fox New’s host.

(The episode also included a brief line where Stewie tells Doug, “You know what, let’s just hate each other in public and maybe not hate each other as much in private.”  “Like George and Kellyanne Conway?” Doug replies.)

Family Guy has taken risks in the past. It has angered radical LGBTQ activists with its transgender jokes and made fun of taking a knee for the national anthem. But if this season’s premiere is any indication, the show is not interested in mining satire available from the missteps of incompetent democrats and radical leftists in power. This episode was content to waste its time with banal shots at a conservative target.

This rant was brought to viewers in part by Toyota, Taco Bell and DirecTV. You can fight back by letting these advertisers know what you think of them sponsoring such content.