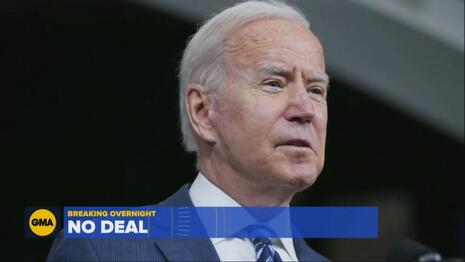 After the Democrats failed to pass their massive spending bill late Thursday night, the liberal news networks on Friday morning woke viewers with panic, fretting that a left-wing “civil war” and a “failure” of leadership by Joe Biden would lead to “chaos.” CBS offered a half-hearted attempt at salvaging the situation, saying that the President is a “couple stops away from humiliation.” Quite the compliment, huh?

Today show co-host Savannah Guthrie opened the show by warning, “Civil War. Democrats fail to come together on a deal for that massive trillion dollar infrastructure package.” She breathlessly related that “President Biden’s agenda hanging in the balance as the infighting within his own party leads to chaos on Capitol Hill.”

The NBC host lamented, “President Biden’s top legislative priority hanging in the balance, in limbo.” Peter Alexander pondered the concept that Biden may not be all that competent: “You know he campaigned on his ability to bring Republicans and Democrats together and right now, he has to prove he can simply unite his own party.”

On ABC’s Good Morning America, George Stephanopoulos echoed NBC’s concerns. He opened the show this way: “No deal. High drama and pulling votes on the infrastructure bill. Can the $3.5 trillion investment package move forward? Is Biden’s agenda in jeopardy?”

Terry Moran offered gloom for the Democrats: “This morning. the White House putting a brave face on what is a tough day for the Biden agenda and Biden presidency.” Describing the chaos, Moran labeled Biden’s efforts as a “failure.”

On CBS Mornings, John Dickerson offered an attempt at pro-Biden spin, pointing out that Democrats are still trying: “If it gets to nothing and they get nowhere, then people have frustration. One of the papers says it’s a humiliation for the President. We’re a couple stops away from humiliation.”

The half-hearted spin on CBS was sponsored by Progressive insurance. Click on the links to let them know what you think.

Partial transcripts are below. Click “expand” to read more.

TONY DOKOUPIL: We’re joined by CBS News Chief political analyst John Dickerson. John, welcome. The debt ceiling issue could be catastrophic for Democrats, not passing anything, I think, would be catastrophic. What’s going on with these bills?

JOHN DICKERSON: Well, you’ve got a four car pileup. You’ve got the bills to keep the government open and the bill on the debt ceiling. Then you’ve got the bill on the infrastructure and then you’ve got the bill on social spending, all coming up at the same time. What’s happening last night that had everybody there late into the night and that’s been on pause is a debate within the Democratic Party. The other two are debates within Republicans and Democrats. But this is a debate within the Democratic Party about the priorities of the Democratic Party which makes it a little bit different. We’re used to debates in Washington where depending on the jersey you wear and the team you’re on it seems all pre-cooked. This is a debate within a party, everybody’s wearing the same Jersey. It’s a family debate. This is what happens with legislation. It’s messy. There are serious things at stake. And that looks messy and we’re all watching the messiness.

DANA JACOBSON: As you point out, it is different because there’s a fracture within the Democratic Party. It was a self-imposed deadline last night. What actually happens, where does there go?

DICKERSON: Well, self-imposed deadlines are important. Nothing focuses the mind like a hanging.

DICKERSON: So what you have is —  this is reality hitting. It was never going to be the case, and the Democratic Party where you have one faction where in their districts they haven’t voted for a Republican since 1980. And then you got Joe Manchin, who comes from West Virginia. Not a single county in West Virginia has voted for a Democrat since 2008. So that’s a big coalition. Tiny little margins. There’s always going to be a fight. And that fight is happening right now and that’s what’s happening. They are trying to figure out with these razor thin margins how to get everyone to agree.

NATE BURLESON: You say the shutdown isn’t normal sausage making when passing bills in Congress. How is this different?

DICKERSON: Well, I always wonder if the sausage making people want to come in and say, “Hey, wait a minute. We do it much more cleanly than this.” The reason this is different is because it is a family fight. Legislation is supposed to be messy. You do the messy business of legislation so we don’t’ fight each other with our fists. And so what’s happening here is it is a debate. The progressives are saying, “There are real human beings at the end of this thing. There are women who aren’t going to get back into the workforce unless they get someone to take care of their kids. There’s somebody who has an opportunity to go to college tho can’t afford it. There are real things we fought for and put you in office, real lives at the end of this.” And then the other side is saying, “Well, yes. But you can’t cost this much because that’s going to hurt real lives too.” The infrastructure bill might create two million jobs. So, there are real issues here. So when people look at this, yes it looks messy. But it’s the messy push and pull of people trying to figure out how to get the best ideas out of the limited political space they have. And that’s what the whole system was set up —

JACOBSON: I know. People at home are so frustrated by it.

DICKERSON: Well, it’s frustrating, sure. Because you want stuff to happen quickly. But this is different than the normal frustration. Right? But it’s also the frustration that was built into the system. That it’s going to be messy and long. Now, if it gets to nothing and they get nowhere, then people have frustration. One of the papers says it’s a humiliation for the President. We’re a couple stops away from humiliation.

DICKERSON: If they pass something today, that’s a pretty short humiliation and you get progress.

JACOBSON: And if you pass something, memories are very short.

STEPHANOPOULOS: No deal. High drama and pulling votes on the infrastructure bill. Can the $3.5 trillion investment package move forward? Is Biden’s agenda in jeopardy?

TERRY MORAN: This morning the White House putting a brave face on what is a tough day for the Biden agenda and Biden presidency. Aides insisting this is one step in what is always the long, difficult process of passing major legislation, democracy is messy they keep telling us. Last night in the final scramble to get something, anything passed on the hill. It seemed more than messy here. No one really seemed to have a real grasp of what was going on. Plans changed back and forth on whether the president would make a public statement. He hasn’t spoken publicly since Monday and the mood here went from giddy hopes to exhaustion and resignation. There’s just no papering over how tough a blow this is to President Biden. He is the leader of his party. Democrats set this deadline and. He failed to unite the party to get it done. But they’re putting their shoulders to the wheel. As you heard from Rachel there. In a statement last night after it was all over press secretary Jen Psaki saying progress has been made but, quote, “we will need some additional time to finish the work,” starting first thing this morning. George.

SAVANNAH GUTHRIE: Good morning, breaking news. Civil War. Democrats fail to come together on a deal for that massive trillion dollar infrastructure package. President Biden’s agenda hanging in the balance as the infighting within his own party leads to chaos on Capitol Hill. Speaker of the House Nancy Pelosi vowing they will vote on it today. So what does it mean for you? We’re live in Washington with the very latest.

GUTHRIE: We’re going to begin, though, in Washington, that overnight drama. President Biden’s top legislative priority hanging in the balance, in limbo. Democrats unable to get on the same page when it comes to the hefty price tag to improve the nation’s infrastructure. A crucial vote on that put on hold. NBC’s Peter Alexander at the White House for us. It was a late night, Peter, good morning, but no progress.

PETER ALEXANDER: Yeah, Savannah, that’s exactly right. The Democrats overnight, they dropped plans for that promised vote on a bipartisan infrastructure bill as Democratic leaders came up shy of striking a deal that would unite the feuding factions of their party around a separate, much bigger policy plan.

SEN. JOE MANCHIN: Let’s look at each bill on its merits. There’s a lot of good in both of them, we should be able to come to an agreement.

ALEXANDER: Progressives pushing back against that smaller figure and threatening to vote down the infrastructure bill if the larger plan isn’t ready to go.

ALEXANDER: Still, lawmakers are no closer to resolving another self-inflicted crisis, a potentially catastrophic default on the nation’s debt that would happen if Congress does not raise or suspend the country’s borrowing limit by October 18th. Republicans so far have refused to help, trying to make Democrats pay a price for raising the debt ceiling on their own, even though it covers past spending approved by both parties. Treasury Secretary Janet Yellen delivering this dire warning if Congress fails to act.

JANET YELLEN: Our country would likely face a financial crisis and economic recession as a result.

ALEXANDER: And what Democrats are trying to do right now is to carve out a framework, simply a framework, for that giant social policy and climate plan that would satisfy both Progressives and moderates. And the stakes are particularly huge for the President, for President Biden. You know he campaigned on his ability to bring Republicans and Democrats together and right now, he has to prove he can simply unite his own party.