“DeSantis announced the consequences that big tech companies like Facebook, Twitter, and Google will face if they violate the privacy of Floridians and interfere with citizens’ access to candidates during an election,” The Epoch Times reported Feb. 2. “Floridians should have the privacy of their data and personal information protected, their ability to access and participate in online platforms protected, and their ability to participate in elections free from interference from big tech protected,” DeSantis (R-FL) proclaimed during a Feb. 2 press conference. 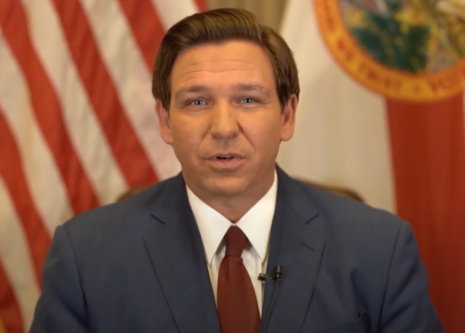 Under this new rule, “technology companies that de-platform a candidate during an election will face a daily fine of $100,000 until the candidate’s access to the platform is restored,” The Epoch Times wrote. What makes the rule have legal credibility is the idea that “If a technology company promotes a candidate for office against another, the value of that free promotion must be recorded as a political campaign contribution enforced by the Florida Elections Commission.”

Desantis further stated: “[if] a technology company uses their content and user-related algorithms to suppress or prioritize the access of any content related to a political candidate or cause on the ballot, that company will also face daily fines.”

He had scorched Big Tech for switching from supporting free speech to enforcing the rule of the powers that be. He also noted how these platforms “have changed from neutral platforms that provided Americans with the freedom to speak to enforcers of preferred narratives.” He also observed that their influence over America’s very politics has grown too big to ignore, illustrating their “decisive role in elections and have negatively impacted Americans who dissent from orthodoxies favored by the Big Tech cartel.”

The unverified account which appears to be tied to Speaker of the Florida House of Representatives Chris Sprowls (R-FL) tweeted an endorsement:

“If democracy is going to survive, we must stand up to Big Tech oligarchs and demand transparency. Proud to stand with @GovRonDeSantis, @LtGovNunez, @WiltonSimpson, @GovGoneWild, @DannyBurgessFL to roll out our proposal to give users control of a type of modern-day public square.”

Florida, in particular, is one of the foremost states leading the fight against Big Tech censorship.

Conservative firebrand Laura Loomer made a name for herself as a Jewish-American right-wing provocateur. After being blacklisted by multiple Big Tech social media and payment processing platforms, telecommunication company Xfinity Comcast appeared to sabotage her campaign in Florida. Sen. Joe Gruters (R-FL) called on Florida lawmakers to rein in Big Tech with the “Stop Social Media Censorship Act.” “The lawmaker cited Loomer as a ‘major’ inspiration for the bill and a ‘poster child for social media bias in banning,’” Palm Beach Daily News reported.