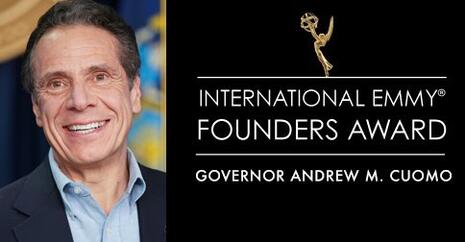 Remember when New York Governor Andrew Cuomo was almost universally hailed by the left over his many coronavirus briefings to the extent that he even won an Emmy in November for them? Of course, the Emmy Founders Award was given to Cuomo in November not so much for what he said but more for the fact that was considered the favored counterpoint to President Donald Trump’s coronavirus briefings which they hated because he was, well, Trump.

A big part of the Emmy ceremony was the top gushing over Cuomo by celebrities which in retrospect, due to the revelations about Cuomo’s office hiding data about the nursing home deaths due to his horribly misguided policy of not isolating COVID patients away from the others in those institutions, now seem more ridiculous than ever.

You can get tooth decay watching the celebrities, introduced by the International Academy President and CEO Bruce Paisner, during the Emmy Awards ceremony November showering sugary praise upon Cuomo primarily because he was their symbol of the un-Trump.

Bruce Paisner: It is now my distinct pleasure to present the 2020 International Emmy Founders Award to Governor Andrew Cuomo, with a little help from some of my fellow New Yorkers.

Spike Lee: To my Governor, the Governor of Empire State, Andrew Cuomo.

Rosie Perez: Governor Andrew Cuomo, you are the man.

Ben Stiller: I was trying to think of something that I could say to you that would be funny, so I called your brother Chris, who could not understand why you’re getting an Emmy since he’s the one on television.

Billy Crystal: In the darkest days of the pandemic, your daily briefings, live from New York, gave us hope, gave us clarity, gave us the truth, and gave us something we were not getting from Washington: Leadership.

Billy Joel: In the midst of this storm, Andrew Cuomo became the nation’s governor. People across the country tuned into his press conferences every day.

Spike Lee: Daily I was watching his press conferences, informing us, telling us what to do.

Ben Stiller: He also said that now that you’re the “love gov” you’ve really transcended politics, and now you’re more of a national sex symbol. You’ll probably get more dates than votes. That’s him saying that, not me.

Rosie Perez: You did your thing during COVID. New York was suffering, we were the epicenter, we were all in a crisis, in a panic and every single day you came on the airwaves and you opened your strength, your leadership and your direction and your caring and your heart.

Billy Crystal: You are the epitome of New York Tough.

Ben Stiller: These are things your brother says about you. I look up to you still.

Robert De Niro: Thank you for your leadership during these trying times. We are New York Tough, smart, disciplined, united and loving.

Ben Stiller: I want to say congratulations again and anything that you didn’t like that I said was your brother’s Chris’s idea.

It is unknown if any of these celebrities will retract their praise for Cuomo in light on the COVID coverup allegations but at least one well known person who was previously complimentary towards Cuomo, Piers Morgan, changed his mind in a most dramatic way in his Daily Mail column on Friday, “The Emmy for shameful lying, slippery obfuscation and deadly dereliction of duty in a pandemic goes to … Governor ‘Saint’ Andrew Cuomo’.”

In large part due to the brutal reality of the COVID coverup revelations, Morgan has had a complete change of attitude towards the governor.

Until now, Governor Cuomo has been very keen to blame former President Trump and his administration for New York having one of America’s worst covid death tolls.

‘New York’s problem was caused by federal negligence,’ Cuomo raged last October. ‘New York was ambushed by Covid. I believe that this was on a par with the greatest failure to detect an enemy attack since Pearl Harbor.’

Now it would appear that it was Cuomo’s own appalling negligence in the way he handled New York’s nursing homes that accounted for much of the death toll.

And it also appears that he has been lying about it, and deliberately covering up the truth even from fellow Democratic lawmakers.

If Donald Trump had done this, the liberal screams of outrage – led by the likes of Robert De Niro – would be bellowing furiously all over America.

It’s time to stop giving Governor Cuomo awards and start holding him to proper account for the needless deaths of thousands of people.

Piers Morgan’s attitude towards Cuomo most definitely changed but will any reporter ask the Emmy Awards gush gush celebs if they also had a similar change of heart?