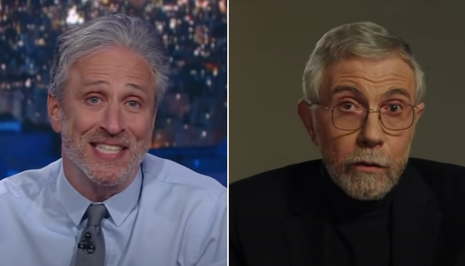 In a new blog headlined “Wonking Out: Biden Should Ignore the Debt Limit and Mint a $1 Trillion Coin,” Krugman dusted off an old neo-Keynesian idea of his that he peddled in 2013. He suggested Treasury Secretary Janet Yellen “mint a platinum coin with a face value of $1 trillion — no, it needn’t include $1 trillion worth of platinum — deposit it at the Federal Reserve and draw on that account to keep paying the government’s bills without borrowing.” Here’s the problem, not only has the idea been condemned as ridiculous, it also may not be legal. Florida Atlantic University Associate Professor of Economics William Luther noted Sept. 28 that “[t]he Treasury is authorized to mint platinum bullion and proof coins. It is *not* authorized to mint a platinum *token* coin. And that, it turns out, is an important distinction.”

A $1 trillion platinum bullion coin would in fact require $1 trillion worth of platinum, according to Luther, which is exactly what Krugman said was unnecessary.

Krugman’s idea is so idiotic that even the liberal Stewart made fun of him in 2013 when he tried to rebuke Stewart as being “lazy” for panning it. Stewart stated during a 2013 segment in response to Krugman that the $1 trillion coin was a “stupid f**king idea.” He ridiculed Krugman as “the only creature perhaps more noble than a freshly felched unicorn.” Stewart referenced an older, Jan. 10, 2013 segment, in which he quipped: “[I]f we’re gonna just make sh*t up,” why not a “$20 trillion coin?”

Krugman decried Republicans blocking an increase to the debt ceiling on the scare narrative that the U.S. has “only weeks to go before we hit a wall and default on payments” But this is false. As Fisher Investments noted, “being at the debt ceiling doesn’t prevent the Treasury from refinancing maturing bonds, so principal isn’t at issue.” In fact, “[I]n no month did interest payments come anywhere near topping tax receipts.” Fisher Investments said this means the government “would likely have the capacity to service the debt (plus quite a bit) even if Congress elected not to raise the debt ceiling.” Earth to Krugman!

In Krugman’s absurd logic, “given the stakes, who cares if the approach sounds silly?” CATO Vice President Norbert Michael told the MRC that the $1 trillion coin idea “is not a very serious one. It is a gimmick, and even if the Treasury were to have the coin minted, a Fed chair would have to agree to have the Fed buy it. Both of these things are not going to happen.”

Conservatives are under attack. Contact The New York Times at 800-698-4637 and demand it distance itself from Krugman’s crazy $1 trillion coin proposal.