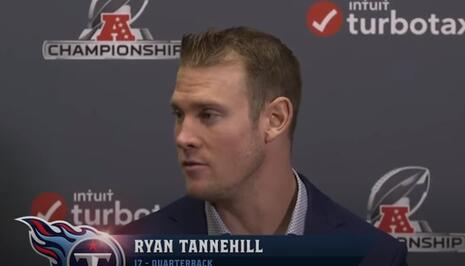 Remember the Titans? The 2000 movie depicted a football team at a newly integrated high school in Virginia overcoming racial division. Twenty years later, the U.S. is being torn apart by social justice warriors creating racial division through the Black Lives Matter movement. Remarks made Thursday by Tennessee Titans quarterback Ryan Tannehill go to the heart of the divisiveness and will be remembered as inflammatory and anti-American.

Following the social justice lemmings in pro sports who refused to perform because of the Jacob Blake killing, the Titans did not practice on Thursday. Instead the Titans held a team meeting and then leaders met with Head Coach Mike Vrabel.

In a YouTube video and with the whole team standing behind them, safety Kevin Byard and Tannehill spoke about racism in America. Following Byard’s remarks, Tannehill, a nine-year veteran with a contract worth more than $100 million, said:

“Like Kevin said, these systematic oppressions have been going on for a long time. Hundreds of years this country was founded, uh, upon racist ideas, um, with slavery being brought here, uh, from the day of foundation. And those ideas have persisted throughout the last hundreds of years, and it’s gonna take time until we can get those all out.”

Byard said the Titans wanted to show solidarity. “We’re sick and tired of seeing our Black brothers and sisters be murdered by police like it’s nothing. … And I’m begging and pleading to the powers that may be, to please, please – we’re crying, I’m spilling my heart out to say that we need change, and we need change as soon as possible.”

Erik Bacharach, Titans beat writer for The Tennessean, didn’t bother with any historical fact checking in his report on Tannehill’s suspect history lesson. He called Tannehill an “eloquent” and “impassioned” speaker since he began talking about racial injustice in June. “At one point during his (Tannehill’s) unprepared statement Thursday, he began to choke up.” That was when Tannehill spoke of his white privilege:

“It’s sickening, and there’s really – it’s sickening to just know that they (African American teammates) have to worry about their kids coming home at night. I have two young kids that, because of the color of their skin, I never have to worry about, if they get pulled over by a police officer, if they’re going to make it out of that interaction alive. That’s a sick fact of the world that we’re living in. So we stand up here together, united, demanding change, that there’s equality and justice for all those situations.”

“And so what was a planned day of football practice became something much more,” Bacharach wrote.

Yes, much more important things than a professional football team preparing for the Sept. 14 NFL season opener at Denver. Coach Vrabel said the team focused on political activism, a subject that a lot athletes value more than their vocation now. The Titans discussed voter registration, lobbying elected officials and teaching children about respect and equality.

Thanks to detestable comments by Tannehill and the team’s hard veer into politics, remembering the 2020 Tennessee Titans will not be a feel-good story.