Fox at 25: Rupert Murdoch and the Triumph of Conservative Media 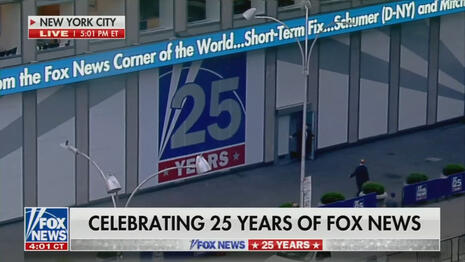 And that sound you hear is the gnashing of liberal teeth at founder Rupert Murdoch’s triumph – and the triumph of the larger conservative media Murdoch launched.

The fact that really gets to liberals is the loss of the once-upon-a-time monopoly of the media by liberals. The game worked like this: The New York Times and Washington Post would set the template with story X in print, and then the broadcast networks and later cable news players CNN and MSNBC would pick it up from there. And voilà! The liberal narrative of the moment was born!

Then the visionary outlier from Australia and his ambitious News Corporation arrived in America. The American media world would never be the same again.

The first sign of a budding conservative media came long before Murdoch arrived in America. That would be with the 1955 creation of National Review magazine by William F. Buckley Jr.. Twelve years later, R. Emmett Tyrrell’s The American Spectator magazine was birthed, planting the flag of conservative media in America.

But it was the Murdoch purchase of The New York Post that really began to break the liberal monopoly. By 1997, Post editor Steve Cuozzo noted that it was The Post that “broke the elitist media stranglehold on the national agenda.” (The Post’s influence was exactly the reason Big Tech blacked out the paper’s investigative scoop on the Hunter Biden laptop.)

There was a major assist from outside the Murdoch News Corporation empire from Rush Limbaugh, who had single-handedly led the revolution in American media that was talk radio, beginning in 1988, eight years before Fox News was born. And talk radio, in turn, supplied the new Murdoch creation of Fox News with television talent, notably in the form of radio talker Sean Hannity and now Mark Levin.

Way back there in the 18th century, the Irish-Anglo essayist and political pamphleteer Jonathan Swift astutely observed that “Vision is the art of seeing things invisible.”

Rupert Murdoch is indeed a visionary, and in the creation of Fox News he could clearly see what others could not. Namely, that a conservative cable channel could and would tap into the mammoth audience of millions of Americans who had, among other things, twice elected Ronald Reagan in landslides.

And who better to hire as the CEO of the new channel than former Reagan and Nixon adviser Roger Ailes? Ailes himself had begun his own career not in politics but as a young television producer for the popular 1960’s Mike Douglas Show.

A chance meeting with Nixon when the latter visited the Douglas show had the young Ailes take it upon himself to sell Nixon on the importance of television in running for president in 1968. Nixon was still seething over his 1960 loss of the first Kennedy-Nixon television debate because of his appearance on screen.

Nixon had rejected makeup, making his 5 o’clock shadow dark stubble of a beard show through, and he also wore a gray suit, which faded into the background Americans watched on their then-black and white television screens. JFK, on the other hand, listened to his television advisers, was perfectly made up, had a tan, and dressed in a crisp dark suit. The result was that Americans who saw the debate on TV said Kennedy won, those who simply heard it on radio gave it to Nixon. Nixon resolved never to make the mistake again. He not only listened to young Ailes he hired him.)

By 1996, Ailes’ combined an instinctive understanding of both television and American politics that proved to be an invaluable asset in the creating of Fox News.

The impact of Fox News can be measured not just by its now perpetual winning streak in the ratings. (And as it celebrates  its 25th anniversary, Nielsen’s ratings show Fox in the third quarter of 2021 with an average prime time audience of 2.372 million viewers, miles ahead of MSNBC (1.267 million viewers) and, even more so, CNN with 822,000 viewers). But another measure of the network’s popularity well beyond the ratings is the degree of animosity directed at it by competitors.

A typical example of this is in the recent book Hoax: Donald Trump, Fox News, and the Dangerous Distortion of the Truth by CNN’s media guru Brian Stelter. The title itself has no self-awareness that it was CNN that spent the Trump era falsely purveying the Trump-Russia collusion hoax, a classic conspiracy theory endlessly pursued not just by CNN but the rest of the liberal media. It was bizarre on its face, and with the recent news of another indictment out of Independent Counsel John Durham’s office Fox headlined the truth:

In short, the entire episode was cooked up by the Clinton campaign – and CNN and others in the liberal media took the real hoax bait hook, line and sinker.

On and on the Stelter book goes, foaming  about this or that on Fox, not to mention, of all things, complaining that Sean Hannity lives in a big house. Oh the horror!

And without doubt, the success of Fox News has inevitably inspired even more conservative channels, notably Newsmax and One America News. Not to mention, with the arrival of the Internet, a veritable ocean of conservative sites presenting and/or analyzing the news.

So on the 25th anniversary of Fox News, let it be said that the term visionary, exactly as Jonathan Swift defined it as “the art of seeing things invisible” is exactly what describes Rupert Murdoch and his vision of the once invisible dream of Fox News.

And thanks for the wider conservative media it spawned.