From Waukesha to San Fran: Why Did Morning Joe Suddenly Go Law & Order? What’s behind a liberal-media outlet like Morning Joe sounding so law-‘n-order on Tuesday? From Joe Scarborough to Willie Geist to—yes!—even Al Sharpton, there was unanimous condemnation of “progressives,” “permissive” prosecutors, and “latte liberals” for their soft-on-crime philosophy.

The panel harshly condemned the low bail that led to the release of Darrell Brooks in Waukesha, Wisconsin, just 11 days before he allegedly killed five people and injured scores of others.

The panel expressed similar outrage for the lax policies in cities like San Francisco, where the refusal to prosecute thieves has led to a wave of looting, or “smash and grab” crimes, in the current lingo. Scarborough scoffed at San Francisco Mayor London Breed suddenly condemning such lawlessness, after tolerating it for years.

Sharpton strikingly said that the “real racism” is not holding people responsible for their criminality, on the theory that they don’t have “the mentality to do anything other than beastly acts.” 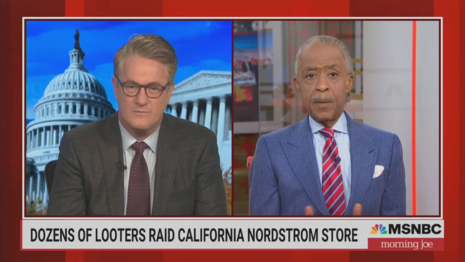 So again, what’s behind this outbreak of tough-on-crime talk on MSNBC this morning?  Let’s grant that there could have been some righteous outrage involved.

But politics is pervasive. Surely the liberal media is painfully aware that the headlines reflecting out-of-control crime are politically damaging to Democrats. After all, the Dems are the party of defund the police, don’t prosecute thieves, and in the case of Squad members like Rashida Tlaib, close all federal prisons within 10 years and free the inmates.

So it’s pretty easy to assume that Morning Joe was playing defense on behalf of the Dems, and trying to send a message to the party’s dominant left wing to back off policies that could prove disastrous at the polls in 2022 and beyond.

Morning Joe getting tough on crime from Waukesha to San Francisco was sponsored in part by Liberty Mutual, GoDaddy, and Away.

REPORTER: [Brooks] was released released from jail just 11 days ago after posting a $1,000 bail, according to the Milwaukee district attorney, who called that, “inappropriately low.”

JOE SCARBOROUGH: Willie: inappropriately low? A thousand-dollar bail for domestic abuse, and trying to run over the mother of his child?

And no cash bail? Which a lot of people on the far-left love to talk about. That people that actually live in New York City and are dealing with skyrocketing crime? That’s why that was a huge issue in the New York mayor’s race.

WILLIE GEIST: We want to turn now to the series of brazen smash-and-grab robberies on the West Coast.

SF MAYOR LONDON BREED: We can’t continue people to allow people to freely flow in and out of this city, commit these acts, and get away with it.

SCARBOROUGH: I’m not sure what the mayor of San Franciso is talking about. We must stop this? I mean, it’s been happening for a couple of years now!

GEIST: These incidents we’re watching these last two days did not fall out of the sky. They happen because there’s a permissive environment in these cities where we’re not going to prosecute property crimes.

SHARPTON: There is nothing progressive about acting like this kind of vile behavior is normal. To normalize it is to act like certain people, or certain communities or certain races, we don’t expect you to do no better. Aww: you tried to run your wife down, or your lady down, that’s what y’all do. Let ’em go. Rather than having a standard there that is fair for everybody. But if you break what is criminal or not criminal, you pay a price. That is real racism, when, when you expect people of a certain community and a certain background not to be able to behave other than somebody that is out of control, that doesn’t have the mentality to do anything other than beastly acts.