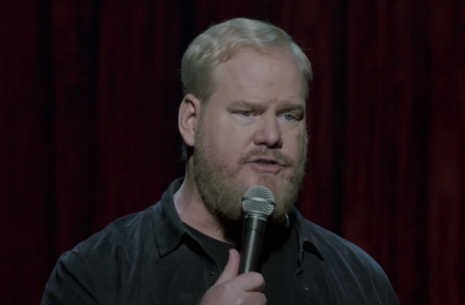 Jim Gaffigan is so secure and proud of his expletive-laden tirade against Trump, the GOP and their supporters from the last night of the Republican National Convention that he used nearly 2000 words on Facebook to convince fans that it was about him saving the country.

He indicated that his obnoxious and mean-spirited personal attacks on Trump’s family and Trump supporters from August 27 were just him speaking out against the current president’s destruction of America. He’s preserving democracy for his grand kids, one “hey fuck you karen” tweet at a time. Give him a break!

In a massive Facebook status, the nice “Catholic” comedian and future Joe Biden voter (those are irreconcilable by the way) tried to explain his full blown Trump Derangement Syndrome-caused break from reality. He began his book of a post saying, “My goal in writing this down is a hope that I can organize and explain to you and myself why I did what I did and decide what we will do over the next 60 or so days… I feel strongly about what is going in our country.”

Well for one, Gaffigan explained, “Honestly, I feel I had no choice at this point.  I think Trump is ruining and possibly has already ruined my country.” Maybe he should just turn off CNN for a while.

He even explained that he’s past the point of policy debate, which pretty much sums up the looting and burning left as a whole. He wrote, “For me this isn’t a debate about the size of government, taxes, health care or even abortion.” Well we know where Mr. “clean Catholic comedian” stands on the abortion issue as a Biden voter. (His hatred for Trump is more important than denouncing a Biden/Harris ticket’s radical abortion policies.)

Gaffigan believed his posts were righteous. He wrote, “I feel a responsibility to coming generations, my children but selfishly I didn’t want to explain to my grandchildren that I didn’t fight to stop Trump.” The comedian added, “Maybe they will see that I stood up for decency, rule of law, and equality.”

Well the bile Gaffigan threw out on Twitter spat in the face of decency, and the fact he claimed he stands for BLM means he stands for the opposite of “rule of law” and “equality.” Just look at the BLM-inspired hate crimes and riots.

Moving on, Gaffigan admitted he enjoyed his TDS meltdown, saying, “it felt liberating.” Good for him. Yes, the past four years, Hollywood types have really had to bottle up the “F Trumps,” haven’t they? That’s absurd. However, Gaffigan admitted he feels like the crazy Trumpers have been running the discourse all along: “It’s like after Thanksgiving 2016 we all decided to let the crazy relative decide the discourse and context of every argument,” he claimed.

Well what do you expect from a comedian other than that kind of funny stuff? Yeah, Trumpers have really been controlling the media conversation. Yeah, and this is the first time MRC Culture has written about a celebrity melting down on social media. Give us a break!