Get Him a Map! CNN Contributor Calls Manchin’s West Virginia a ‘Coastal State’ 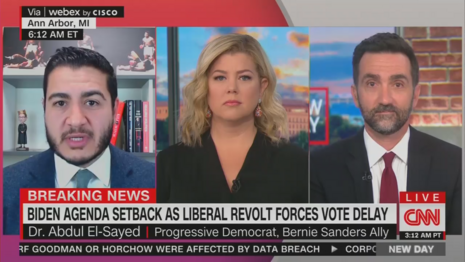 Liberal ignorance of flyover country was on full display on CNN this morning.

As NewsBusters tweeted, “Someone get the Dr. a map.”

West Virginia is—of course—a landlocked state. Even worse, El-Sayed grew up in Detroit, which is less than 300 miles from West Virginia’s panhandle. Maybe he should take a scenic drive south, get a look at the colorful autumn foliage.

Sidenote: My tweet on El-Sayed’s flub, and the reader comments that followed, clearly got under the doctor’s epidermis.  He eventually made the tweet seen below in response, mocking my relatively minuscule Twitter following [he has 124K followers.] “Habibi” is an Arabic term of endearment meaning “my dear.” Think El-Sayed just might have been using the term sarcastically?

El-Sayed seems to have deleted the tweet, but we have the screenshot.

Note: El-Sayed also took at shot at Manchin’s integrity, saying it is “naive” to take Manchin’s ideological objections to the $3.5 trillion bill at face value, because he is “very much enmeshed in both the coal industry and the pharmaceutical industry.” Translation: Manchin is bought and paid for by big business.

To her credit, co-host Brianna Keilar noted: “his constituents are enmeshed, certainly, in the coal industry”—i.e. the livelihood of many West Virginians is dependent on coal.

BRIANNA KEILAR: Let’s talk about this now with CNN contributor and former Detroit health commissioner, Dr. Abdul El-Sayed. Bernie Sanders endorsed him when he ran for Michigan governor in 2018.

ABDUL EL-SAYED: Let’s not forget all the things inside the [$3.5 trillion] reconciliation package, which is an awfully-named package. Because it includes so much. Everything from legislation to take on climate change, to extending the social infrastructure of our country.

The last thing I want to say about Senator Manchin is, let’s not forget, yes, he is from West Virginia, it is a conservative state. But, he’s also, he’s also very much enmeshed in both the coal industry and the pharmaceutical industry. And so, to take him at face value on ideology is a little bit naive.

KEILAR: His constituents, certainly, are enmeshed in the coal industry. This is the guy who came to the Senate with an ad where he was shooting a hole in the cap-and-trade bill.

EL-SAYED: I want to do, I do want to comment on this point that Joe Manchin made about entitlement mentality. The fact is that he hasn’t pointed what he wants to cut from 3.5 to 1.5. Those are just arbitrary numbers.

And when you look at his state, West Virginia, the childhood poverty level is among the highest in the entire country. We watch as climate change is ravaging coastal states like his. And so, I really would like to hear what it is that he does not want to offer people in West Virginia, rather than have a conversation about quote, unquote entitlement, and dollars.