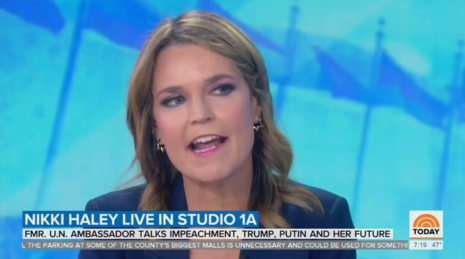 Savannah Guthrie is NO fan of Donald Trump, and if her recent attacks on him are any indicator — look for the NBC Today show co-host to pepper the President with nasty questions at tonight’s Trump townhall event.

From her co-host chair Guthrie asked Joe Biden’s wife Dr. Jill Biden if she thought Trump was “a threat to the very essence of this country.” She pushed former Secretary of State Condoleezza Rice to say if she thought Russia “elected Donald Trump over Hillary Clinton.” Guthrie also pressed former United Nations Ambassador Nikki Haley if she had “any doubt about the fitness of this President to serve?”

Back in 2016 a fearful Guthrie asked former President Barack Obama: “Do you personally find it frightening, the prospect of him [Trump] having the nuclear codes?”

The following are just a few of Guthrie’s most liberal outbursts from her Today show co-host perch over the past few years:

“When you look at the 2016 election and you look at how, relatively speaking, it was decided by a handful of votes in a few states, do you think it’s possible that Russia’s election interference actually worked? It actually elected Donald Trump over Hillary Clinton?”

How Disappointed Are You That Republicans Haven’t Turned On Trump?

“I have to ask you, Mrs. McCain, you know, are you disappointed in fellow Republicans? I keep thinking of Lindsey Graham. You – he and your husband [the late Senator John McCain] were inseparable for a period of time there and he has certainly become an ardent Trump – and vocal Trump supporter. Are you disappointed about that and other establishment Republicans?”

Will Biden-Harris Be Able to Overcome the “Racism and Sexism?”

“Hillary Clinton was very blunt, saying that she feels that sexism was one of the contributors to her loss in 2016. Do you worry about racism and sexism affecting this race with Kamala Harris on the ticket?”

The Real Threat to America

“I watched very carefully Vice President Biden’s campaign video and the  announcement. And he said that he didn’t think, in essence, that the country could survive eight years of President Trump. He said Trump ‘will forever and fundamentally alter the character of this nation.’ Do you see it that way? Do you think that President Trump is a threat to the very essence of this country?”

Terrified That Trump May Blow Up the World

“Hillary Clinton says that Trump is most dangerous candidate ever to run for president. On this very specific issue, do you personally find it frightening, the prospect of him having the nuclear codes?”

“[Trump’s] top cabinet picks come under fire for ties to bailouts and Wall Street. Critics saying this is not how you drain the swamp….”

“Let me quote Michael Bloomberg, a billionaire, hardly an enemy of business. He said, ‘CEOs aren’t waiting on a tax cut to ‘jump-start the economy,’ a favorite phrase of politicians who have never run a company – or to hand out raises. It’s pure fantasy to think that the tax bill will lead to significantly higher wages and growth.’ I’ll ask you plainly, are you living in a fantasy world?”