Giddy Maddow Has Her Own ‘Thrill Up The Leg’ Moment: Obama, Harris Gave Me ‘Chills’ 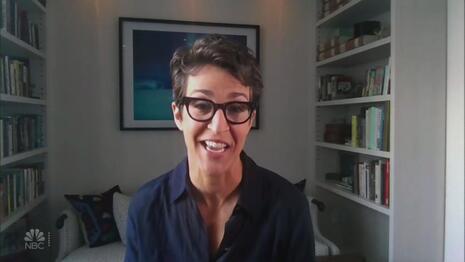 Rachel Maddow had her own “thrill up the leg” moment while on the Tonight Show, Thursday. The MSNBC host was ecstatic over Michelle Obama’s speech and Kamala Harris’s nomination, saying they both gave her “chills.”

“First of all, before we even get into this, I want to thank you for coming on but also, thank you for — for just continuing to do your job, and showing up, and speaking to the public because, we need you. And it’s important,” he gushed, before moving on to talk about the Democratic National Convention.

But Maddow’s excitement for the DNC speakers was equally shared by Fallon. He encouraged Maddow to talk up Michelle Obama’s “pretty flawless” speech earlier in the week.

Having her own Chris Matthews “thrill up the leg” moment, Maddow gushed that incomparably wise Michelle Obama’s words “sent a chill through me:”

RACHEL MADDOW: Yeah. I mean, she’s Michelle Obama and you’re not like, there’s nobody like her in the world. She’s got this sort of centered wisdom that I feel like she moves people in a way that other people don’t and so, for her to say, “Listen, I hate politics but I’ve also seen the presidency up close and if you think it can’t get worse, I’m here to tell you it can.’ That like, sent a chill through me!

She was equally moved by Biden picking Kamala Harris: “It’s also true that having a woman of color on the ticket for the first time ever, gives you chills.” At that line, Fallon clapped like a seal.

The pair also fawned over former President Obama. Fallon touted how the highly divisive speech moved him with emotion and he hoped it would inspire young people to go vote for Biden:

I think it was more emotional, I think, just hearing him talk and be like, I haven’t heard a speech like this in so long. He’s so good at this and you go like, oh, this is so — I hope everyone out there sees this. I hope every young person sees this who’s going to vote…

Maddow agreed his dire warning about President Trump was “going to stick with her for a long time” because it was so unlike him. Really? Obama said nasty things about Trump in the 2016 and 2018 elections as well. This isn’t new or unlike him to attack his successor.

However the pair continued to spread Democrat propaganda later in the show about Black Lives Matter violence and mail-in-ballots. Fallon asked Maddow if “Black Lives Matter and fighting for racial justice” protests would affect the election. Maddow hoped so, hailing how she had seen a lot of “voter organizing stuff” at these demonstrations.

The pair showed their lack of self awareness by fretting about Trump objecting to mail-in-voting just a few questions later. (So protesting in large groups is great, but voting at a booth far away from others is “unsafe”?)

MADDOW: Yes, it’s very simple stuff and the argument against it is very disturbing, right, which is — I mean, the president is saying he wants to deny the post office resources so they can’t process millions of mail-in ballots. Well, why do people want to vote by mail because of the freakin’ frakin pandemic, not because they’re trying to, like, get one over on you or they’re abusing the, you know — abusing the stamp process.

Somehow I think it’s more than likely that both of them have left their house since March.

If you don’t like late-night comedy shows turning into Democrat talking heads, you can tell NBC’s Tonight Show advertisers, Subaru and Verizon.