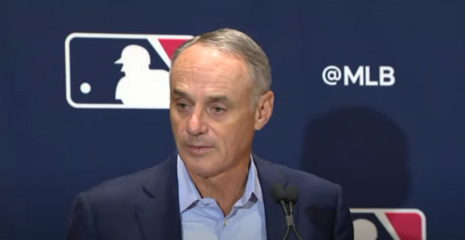 The game was to have been staged July 13 in Atlanta. MLB actually executed a social justice double play by also yanking the baseball draft away from Georgia.

Rob Manfred, the commissioner of baseball (seen in file photo), framed the decision as the result of engaging in “thoughtful conversations with clubs, former and current players, the Players Association, and The Players Alliance, among others. … I have decided that the best way to demonstrate our values as a sport is by relocating this year’s All-Star Game and MLB Draft.”

What are those values? “Major League Baseball fundamentally supports voting rights for all Americans and opposes restrictions to the ballot box,” Manfred said. MLB joined the so-called non-partisan Civic Alliance “to help build a future in which everyone participates in shaping the United States.” Baseball, he says, is giving “unwavering support” to fair access to voting. If that were truly the case they wouldn’t be opposing Georgia’s new law.

ESPN reported the Georgia bill was signed into law on March 25, with protestors outside the state Capitol calling it “Jim Crow 2.0.”

James Wagner and Kevin Draper of The New York Times wrote that MLB delivered “the first major rebuke to the new Republican-backed elections law in Georgia that particularly curtails voting access in the state’s urban areas.”

Writing for CBS Sports, Dayn Perry said, “President Biden recently announced his support for such a decision by MLB. Prior to that, Players Association director Tony Clark told the Boston Globe that the baseball player’s union was ‘very much aware’ of the situation in Georgia and the potential optics of holding the All-Star Game in the state.”

Deadspin’s Jesse Spector said MLB is generally not regarded as “progressive,” but Commissioner Manfred made the right move by stripping Atlanta of the game. He also suggested the Republican politics of certain baseball owners are part of the back story:

“Part of the reason it’s a surprise for MLB to take such swift action is that many team owners in baseball, led by Charles Johnson of the Giants, have supported some of the politicians most connected with restricting voting rights, because that’s the way Republicans have decided they can best win elections, rather than coming up with policies that actually have broad appeal.”

Similar can be said about Democrats trying to seize national control of elections with H.R. 1.

USA Today writer Gabe Laques went so far as to tie the punishing move by MLB to the George Floyd killing in 2020:

“MLB’s removal of one of its jewel events – which this year will include the draft for the first time – comes after a year in which the COVID-19 pandemic and the killing of George Floyd by a Minneapolis police officer caused the sports industry to reconsider its influence within society.”

Standing apart from the left-stream media groupthinkers, Outkick’s Clay Travis tweeted, “This is the worst decision baseball has made since the 1995 strike. Simply pathetic.”