New York Times economist Paul Krugman has a knack for opening his mouth on Twitter and letting nothing but disgusting nonsense and hate fall out. 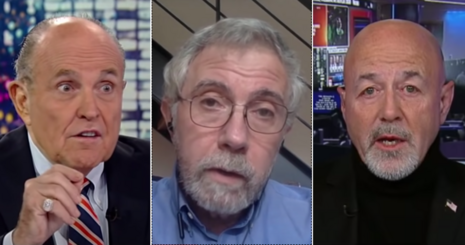 Taking to Twitter on the anniversary of the 9/11 terrorist attacks, Krugman exploited the somber day to spit disgusting attacks at former New York City Mayor Rudy Giuliani (R) and former New York Police Department Commissioner Bernard Kerik. Krugman tweeted in a thread: “[O]f course the Bush team used 9/11 to take us into an unrelated and disastrous war. It’s actually remarkable how many of the media-promoted ‘heroes’ of 9/11 ended up revealed as horrible people. Remember Bernie Kerik? And will Giuliani ever get off my TV screen?” [Emphasis added.]

Like a train-wreck, Krugman continued to crash and burn: “Almost two decades on, it’s now clear that the real threat to America comes not from foreign terrorists but from home-grown white supremacists. But you know what? That was true even in 2001.” [Emphasis added.]

Seriously, Krugman? “White supremacists” are more of a “threat” than “terrorists”?

Did he forget that at least 2,977 people were killed in those attacks because of al Qaeda?

In another tweet in the thread, Krugman took advantage of the terrorist attack to go after Republicans for …  allegedly exploiting the attack.

I groan whenever I see some pundit describing the aftermath [of 9/11] as a time of national unity. On the contrary, Republicans began exploiting the atrocity almost immediately — trying to use it to cut capital gains taxes within 48 hours.

But this is typical for Krugman’s Twitter account, which he uses to inundate his followers with spiteful lunacy.

In January, Krugman erupted on Twitter with arguably his most disturbing tweet in 2020. Krugman blurted: “Well, I’m on the phone with my computer security service, and as I understand it someone compromised my IP address and is using it to download child pornography.” As if his initial tweet wasn’t cringe enough, Krugman proceeded in another tweet to invoke his newspaper to come to his defense: “The Times is now on the case.” [Emphasis added.]

Krugman said he deleted the original comment, but buried himself again by revealing he may have fallen for a scam: “Deleted original tweet. Times thinks it may have been a scam. Anyway, will have more security in future.”

He didn’t stop there. When the BLS released the May jobs report showing that employment increased by 2.5 million, Krugman didn’t know what to do with the numbers. Instead, he floated a conspiracy theory in a June 5 tweet that would earn him a lot of backlash.

He would later recant on this conspiracy theory. But in his recant, he justified himself on these grounds: “I was just covering myself, because so many weird things have happened lately. But I apologize for any suggestion that a highly professional agency might have been corrupted.” [Emphasis added.]