Apparently there’s no way a smart conservative woman can succeed unless she’s using her feminine powers to get ahead.  That’s the hateful take from View co-host Joy Behar. The arch liberal tweeted this on Wednesday afternoon: “These Republican senators (Sasse and now Cruz) are shamelessly flirting with ACB. Obnoxious.”

Apparently, all the questions need to be along the lines of Mazie Hirono wondering if Barrett is a rapist. 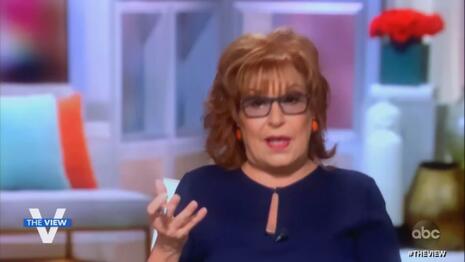 Behar has an odd standard when it comes to male/female dynamics and politicians.  On January 5, 2016, Behar was confronted by token conservative Paula Faris with the rape and assault allegations against Bill Clinton. Then-co-host Faris reminded: “Juanita Broaddrick, Kathleen Willey. They say that he [Clinton] either exposed himself to them, raped them or groped them.” Behar openly admitted her double standard: “He is a dog. Let’s face it.” She later declared, “But I still will vote for Bill Clinton because he votes in my favor.”

Regarding the sex assault accusations against Joe Biden, Behar on May 5, 2020 dismissed, “The right-wing does not apologize. They don’t mind being hypocritical. Why are we so pure as the driven snow? I mean really.”

This is the same Behar who in 2017 gushed over “hot” hero Bernie Sanders, insisting he “aroused” her. Sounds kind of like… flirting.