Apparently the Kavanaugh-bashing, #MeToo-supporting, potential first ever female Vice President is fine headlining fundraisers put on by a Hollywood sexist, who doesn’t even like her that much, (or didn’t when Harris was a presidential candidate.) 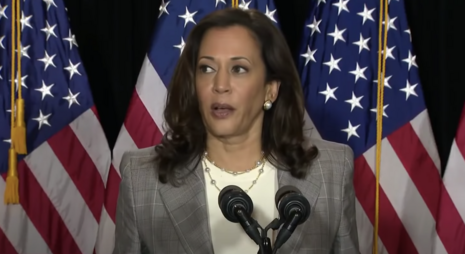 The Washington Free Beacon reported on September 3 about a Kamala Harris-headlined Hollywood Democrat party fundraiser being co-hosted by Doug Prochilo, a Hollywood producer, Democrat donor, and frequent user of the term “twat” in reference to conservative women he doesn’t like.

Prochilo, a TV producer, B-movie screenwriter and writer for TV series “Ghost Whisperer,” donated $100,000 dollars to be one the virtual fundraiser’s “co-hosts” along with other Hollywood celebrities like Don Cheadle. The September 3rd event, which was also attended by Star Wars director J. J. Abrams – who donated $250,000 to “host” the gig – raised money for the “Biden Victory Fund” and provided a special spotlight on the former vice president’s new female VP pick.

Washington Free Beacon snagged screenshots from Prochilo’s Twitter account to point out the hypocrisy of this sexist propping up a female candidate which he even disparaged in the past. In May 2019, Prochilo referred to then White House Press Secretary Sarah Huckabee Sanders as a “twat,” who deserves to be in “hell.”

He slimed the embattled White House staffer, saying, “There will be a special place in hell for this demented, amoral twat.” Wow, that’s probably the epitome of verbal abuse to a female.

It seems as though the “T” word was Prochilo’s go-to insult for people of the opposite sex and political alignment. He hit subsequent WH Press Secretary Kayleigh McEnany with the same abuse back in 2018, when McEnany was the RNC spokesperson.

Responding to her tweet about Former FBI Director James Comey’s corruption, Prochilo tweeted, “I’ve held my tongue until now, but I’d be doing the public a disservice by not pointing out the fact that you’re an insane twat.” Another winner. 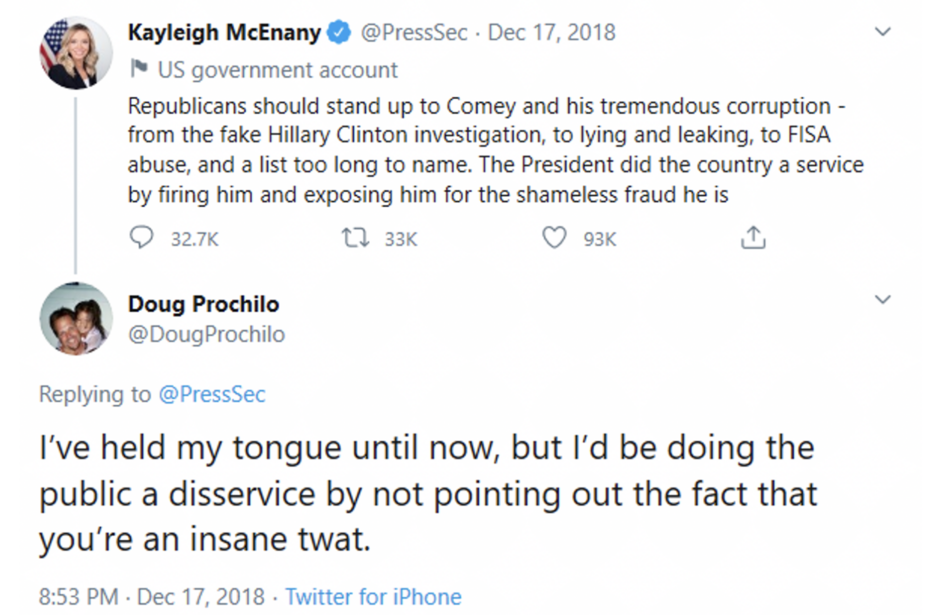 Still, his “T-word” record includes abuse for Senator Susan Collins (R-MN). When the politician decided to vote for Brett Kavanaugh’s appointment to the Supreme Court, the producer tweeted, “WOMEN: these are the kind of uptight old twats that are deciding the futures of our daughters. VOTE THEM OUT.”

Even more ironic is that Prochilo had no love for Sen. Kamala Harris (D-CA) when she was running for president for 2020. He used Twitter to constantly admonish her for not tweeting hysterically about the Orange man in office.

In one, he wrote, “Your constant ‘issue’ tweets, ignoring the big issue – that our democracy is crumbling – is growing tiresome.”

Well at least he doesn’t call Democrat women “twats.” According to The Washington Free Beacon, Prochilo refused to respond and made his account private at the request for comment from the outlet. On September 4, Prochilo went so far as to delete his account. Sounds like he knows he’s been a massive … jerk.

And for Harris to accept money from such an insane sexist seems a little off-color for someone who considers herself a feminist. But money is money and they need it to beat that orange man. How pathetic.