How an Arrogant Journalist Helped Crucify Columbus in New Haven Since 1892, a statue of Christopher Columbus in New Haven’s Wooster Square has been a place where Italian Americans rallied on Columbus Day. It’s gone now, another victim of the current fashion of erasing our history. It’s gone partially thanks to the willful ignorance and arrogance of a New Haven Register journalist, and his reliance on the anti-American lies of the left’s favorite history textbook. 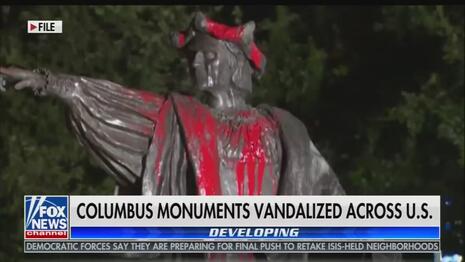 The sorry episode began with Randall Beach’s June 18 column calling for the statue to come down. Beach basically reprinted the opening pages of what he called a “ground-breaking book,” A People’s History of the United States, by the late history professor and communist Howard Zinn. The column repeated Zinn’s lies (many of which were plagiarized from Zinn’s fellow anti-Vietnam War protestor Hans Koning) painting Columbus as someone who enslaved and murdered the gentle “Arawak” natives who came up to greet him and his men.

Beach calls these opening pages of Zinn’s book “heartbreaking,” and they would be but that they have no basis in fact. Zinn’s sources are anti-Columbus propaganda and when he does quote from Columbus’s log he leaves out critical information, misrepresenting what Columbus actually wrote.

When I read Beach’s column, I emailed him to present the truth. I had spent over two years writing a book in which I painstakingly researched the claims of Zinn about Columbus and other American heroes and episodes. My book contains about 1,000 endnotes (that’s 1,000 more than Zinn provided; People’s History offers only a bibliography). I did research in primary and secondary sources, and even went through Zinn’s papers at Tamiment Library at New York University.

Beach apparently wasn’t impressed. His reply was flippant. “Sure, Zinn had a bias and you do too,” he sneered, incredulous I doubted Zinn’s account. “Are you seriously claiming he altered words from Columbus’ own journal? And that he altered what Las Casas reported? These are primary sources; from ‘the horse’s mouth’ and from a priest on the scene.”

I wrote back explaining that Zinn had grossly misrepresented what Columbus wrote in journals by leaving out key words — something he did to the accounts of Columbus and others. I explained the unreliability of Bartolomé de Las Casas as a historian, and that the plagiarism of Koning — a creative writer, not a historian — should by itself raise suspicions. I linked to  a review of People’s History by Professor Michael Kazin, a historian and a proud democratic socialist. Kazin called it  “bad history,” that was “grounded in a premise better suited to a Conspiracy-monger’s website than to a work of scholarship.”

His entire reply to my arguments: “So I guess the conclusion here is that Zinn got it all wrong and Columbus actually was a generous, humane guy who never hurt anybody.”

Then, in his July 8 column, he wrote that “When I wrote a column June 18 (‘Why the Columbus statue must go’) summarizing historian Howard Zinn’s shocking findings about the cruelty of Christopher Columbus toward the Indian people, some readers accused me and Zinn of being biased and unfair.” He cited a letter writer who charged him with “’cherry picking’ information.” Beach said “critics, who are angry that the city of New Haven removed the Columbus statue … cannot be persuaded, no matter what the evidence, that Columbus committed ghastly acts after he ‘discovered America.’”

Beach then proudly announced that he had found “a book describing the real Christopher Columbus” that “goes into far more detail than Zinn did about the life of Columbus. The book is ‘Columbus: His Enterprise,’ subtitled ‘Exploding the Myth’”  … by Hans Koning. The very book I had indicated in my email as the plagiarized source.

I decided to write a letter to the editor of the Register explaining my findings about Zinn’s work and detailing my exchanges with Beach.

I got the runaround (“too long for a letter, but we’ll consider it for an op-ed,” “sent on to the editor,” “sent to the editorial page editor”) and then silence. I wasn’t surprised. The New Haven Register doesn’t seem to prize honesty or intellectual rigor — it’s protecting Beach, who either is a propagandist with an agenda or is intellectually incapable of doing his job.

Sadly, America’s newsrooms are riddled with Randal Beaches, activists who in their arrogance and willful ignorance, are happy to help the left erase American history.

Mary Grabar, Ph.D., a former college instructor, is a resident fellow at the Alexander Hamilton Institute for the Study of Western Civilization. She is the author of “Debunking Howard Zinn: Exposing the Fake History That Turned a Generation against America.”