How Dumb Are We? CBS Host Pretends It’s Shocking Woodward Showed a Bias! 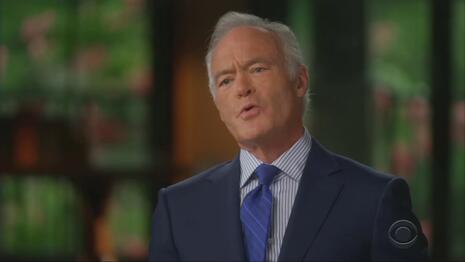 How stupid does Scott Pelley think we are? Can we really be told after five years of fire-breathing televised Trump hatred that we live in a world where reporters stick to reporting, not editorializing?

The most preposterous thing that can possibly be said on 60 Minutes is that reporters are supposed to hide their political opinions. After all, it was a 60 Minutes program where Dan Rather destroyed his career with fake National Guard records about George W. Bush.

It can be said that 60 Minutes is about as serious about presenting objective reporting as CBS has been about preventing sexual harassment at the office.

Pelley touted Woodward as a destroyer of presidencies, the man whose “first investigation, reported with Carl Bernstein, led to the resignation of Richard Nixon.” But there it was near the end of Sunday night’s interview, Pelley claiming reporters are “not supposed” to reach “editorial conclusions” about presidents! He suggested that spewing anti-Trump opinions was a little naughty, a bit shocking:

SCOTT PELLEY: In our interview, we asked about another controversy—contained in the last line of the book. [To Woodward] It might disappoint some of your fans that you reach an editorial conclusion at the end of this book, something that reporters are not supposed to do.

BOB WOODWARD: Yes. I say the president is the wrong man for the job.

PELLEY: But, you’re known as the reporter who doesn’t put his thumb on the scale. And yet, at the end of this book, you do just that.

WOODWARD: It’s a conclusion based on evidence, overwhelming evidence, that he could not rise to the occasion with the virus and tell the truth. And one of the things that President Trump told me, “In the presidency, there’s always dynamite behind the door.” The real dynamite is President Trump. He is the dynamite.

It’s simply bizarre that Scott Pelley would pull out this old saw. As CBS Evening News anchor back in 2017, Pelley greeted Trump in his first week by slamming “a weekend of tweeting tantrums and falsehoods,” and a few weeks later, denounced Trump’s “fictitious claims” and “presidential statements divorced from reality.” No one would imagine that CBS News didn’t believe in reaching “editorial conclusions.” These lightning bolts from Pelley were a nightly thing.

The only conclusion that can be reached here in this discussion between two gray-haired retirement-age journalists that this is simply a shameless infomercial, using the antiquated notion of journalistic objectivity to add shock value and sell more books for Simon and Schuster, another affiliated Viacom-CBS property. The corporate synergy requires this kind of con artistry.

As Geoffrey Dickens notes today, CBS promoted Fear — the previous Woodward Trump-bashing tome — by noting he found Trump staffers to say Trump was an “idiot” living in “Crazy Town.” Yeah, nobody can tell what Woodward is attempting to accomplish.

Our “news” networks could always decide to dedicate themselves to the old ideal of objective reporting on all government officials and political candidates “without fear or favor.” But to pretend that’s been in any way observed in the Trump era is a bad joke.