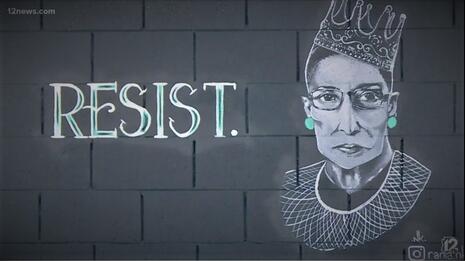 While liberal journalists scream in advance what President Trump desperately needs is live real-time “fact checking,” we will remind you just how stupid that liberal journalists think the American “sheeple” are. USA Today posted a fact check in case anyone was fooled by the Babylon Bee’s hilarious article “Ninth Circuit Court Overturns Death Of Ruth Bader Ginsburg.”

In case you’re so incredibly dumb that you think judges can revive the dead by judicial fiat, Chelsey Cox filed a verdict:

We rate this claim SATIRE, based on our research. A satirical article about the 9th Circuit “overturning” Supreme Court Justice Ruth Bader Ginsburg’s death has no basis in fact. It is true that the 9th Circuit has ruled against many Trump-era policies.

“In a close decision, the judges on the court have ruled RBG’s death unconstitutional and will block Trump from nominating a replacement,” the article says.

Ninth Circuit Judge Kim McLane Wardlaw was credited with issuing the ruling on the basis that Ginsburg’s death was an “affront to the (Constitution)” and the “God-given right to abort as many babies as possible and sell their body parts for research.”

Therefore, Ginsburg will still be considered “alive” by the law, the article says. As to how the court will accomplish this feat, Wardlaw admitted, according to the article, “We’re still figuring that part out.”

Any attempt to fill the vacancy left by Ginsburg will be blocked by the 9th Circuit until she can be cloned or resurrected, according to the article.

Cox then “corrected” the jokes:

There is no record of any Wardlaw opinion on Ginsburg’s death on the website for the 9th Circuit, but she participated in a panel discussion Friday about Ginsburg’s life produced by the UCLA School of Law. There was no mention of “reviving” Ginsburg during the discussion.