How Soft Was MSNBC’s Rachel Maddow on AOC? Let Us Count the Ways… 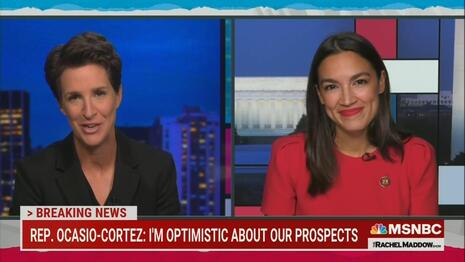 Liberals love to mock Fox News for providing an unchallenging “safe space” for conservative Republicans, with fawning, facilitating interviews. They’re not as quick to recognize when “their” channels do that — first, with anyone named “Obama.” But on Wednesday night, Rachel Maddow — in most weeks, the only liberal cable show with ratings in the top ten — fawned over Alexandria Ocasio-Cortez.

Check out the softballs AOC was gifted. There were only three questions in eight minutes.

1. Tell us about what you socialists talk about on the Hill!

OCASIO-CORTEZ: You know, I think the conversations that happen within the Progressive Caucus are very focused in how do we expand child care, health care, climate action and restore power to working class people in the United States of America. That is what we talk about every day, all the time, from week to week.

MADDOW: For people who don’t follow congressional process very closely, a lot of people who I know who I respect their sort of news judgment on these things, they say all of our intensive coverage of this process and the will they-or-won’t they discussion is alienating to a lot of people, none of the process makes much sense, the filibuster itself is a mystifying thing.

Um, can you explain for folks who maybe haven’t been covering this, or following this super closely, why there is an insistence that this smaller bill tomorrow, this bipartisan roads and bridges bill, shouldn’t pass on its own tomorrow, right away and then move on to the larger bill later? Why is there an effort to link them both and make sure that the big bill doesn’t get delayed indefinitely after the small bill passes?

OCASIO-CORTEZ: Yeah. So I am, I completely agree with you. That a lot of this discussion about process and tit for tat just is very difficult to follow and doesn’t really cover the heart of this conversation, which is that we have two bills at present one which covers — which underfunds most priorities across the board so there are very few priorities that even get the full funding that they even need.

There’s no question about whether she’s willing to consider how it will affect Democrats if neither bill proceeds. That would be so mean!

The answer to this question goes on for almost four minutes, 684 words of transcript. Maddow just provides a happy platform.

3. Are you optimistic? (Please talk some more.)

OCASIO-CORTEZ: …And so, if we can just stick to our original plan, stick to the promises we`ve made each other, we can proceed in good faith and transform the lives of millions of Americans for the better.

Then there was the eternally grateful close:

MADDOW: New York Congresswoman Alexandria Ocasio-Cortez, making a really important structural point there about what motivates individual members of Congress and their decisions at moments like this, moments of heartburn as you say — thank you, Congresswoman, for joining us tonight I know tomorrow is going to be fraught. And I appreciate you helping us set the stage. Thank you.

PS: She led into the segment by attacking the media:

Alert @BrianStelter! Rachel Maddow is attacking the “Beltway press” for getting things “100 percent wrong.” It’s Fake News! Why does she hate Democracy and the First Amendment?

(She’s sticking up for the socialists, er, “progressives,” like the press hates them.) pic.twitter.com/rgqvJS8JPf