How Stupid Are We? PolitiFact Checks Nutty Video Saying Biden’s ‘Not a Human Being’

Just how stupid does PolitiFact think Americans are? Why do they “fact check” ridiculous videos few would believe about Joe Biden? Get this:

Video “proves 100% that President Joe Biden is not a ‘human’ being.”
No, this video doesn’t prove Biden isn’t human

What’s next? “Joe Biden is not made of Spam”? PolitiFact offers these bullet points if you’re short on time:

IF YOUR TIME IS SHORT
— President Joe Biden is a human.
— He wears a rosary to remember his late son, Beau Biden. A snake did not emerge from his jacket during a debate with then-President Donald Trump.

The offending video is on a “BamilyMagNation” Facebook page with 3,278 followers. (By comparison, PolitiFact’s Facebook page has 836,336 followers.) Ciara O’Rourke described the offensive video, footage of a September 29, 2020 Trump-Biden debate narrated by a guy with a Jamaican patois, with profanity blended in. Check it out, it becomes a bit hilarious to think the liberals fear someone’s buying this bunk: 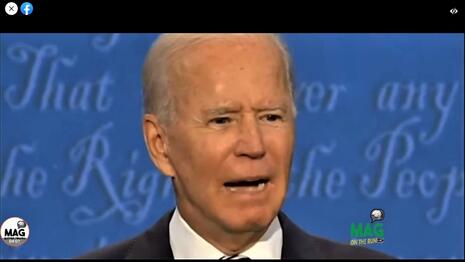 “THIS PROVES 100% THAT PRESIDENT JOE BIDEN IS NOT A ‘HUMAN’ BEING,” a description of the video says.

Someone narrating the clip claims that something “that looks like live little serpents” emerges from Biden’s suit jacket.

“That s— is alive,” the narrator says. “It kind of looks like he’s shaking his head a little bit.”

The camera then pans to Biden and the narrator says: “That’s not a human being, people.”

This post was flagged as part of Facebook’s efforts to combat false news and misinformation on its News Feed.

It’s extremely believable that Biden is wearing a rosary of sorts on his wrist to honor his late son. It fits his whole “devout Catholic” tap dance routine.