Watching A Charlie Brown Christmas has been a tradition for millions since it first aired on December 9, 1965. This year, many Americans were disappointed that Apple TV scooped up the streaming rights for the 2020 season. The outrage ultimately resulted in it showing up on PBS. (You can still buy the holiday offering on DVD.)

However you watch it, there’s so much to appreciate: Many love the iconic Vince Guaraldi score, the humor and the animation. But one part of the special has always stood out and made it unique: Linus’s recitation of the Gospel of Luke.

Explaining the true meaning of Christmas in a network television special broadcast to millions was a controversial move, even 55 years ago. In 2015, The Washington Post published a retrospective on A Charlie Brown Christmas. Michael Cavna explained Peanuts creator Charles Schulz’s mission in making the special:

Charles Schulz insisted on one core purpose: A Charlie Brown Christmas had to be about something. Namely, the true meaning of Christmas. Otherwise, Schulz said, “Why bother doing it?”

To Coca-Cola’s credit, Mendelson says, the corporate sponsor never balked at the idea of including New Testament passages. The result — Linus’s reading from the Book of Luke about the meaning of the season — became “the most magical two minutes in all of TV animation,” the producer says. 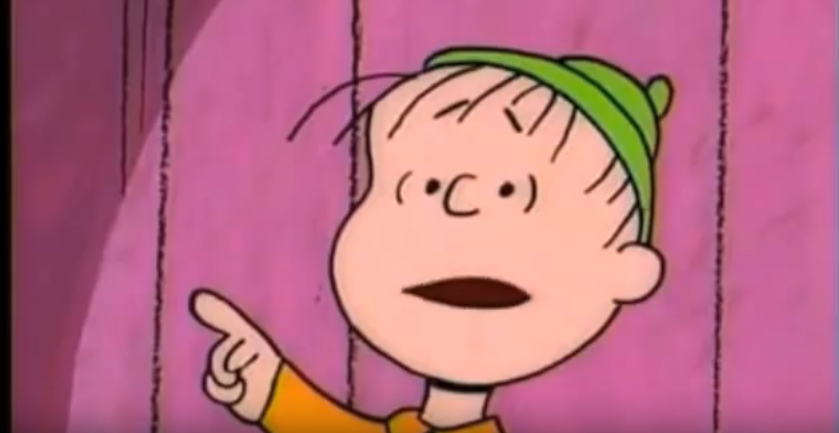 Schulz stood strong, despite efforts to talk him out of quoting from the Bible. On December 5, 2005, USA Today recounted:

[Executive producer Lee] Mendelson and animator Bill Melendez fretted about the insistence by Peanuts creator Charles Schulz that his first-ever TV spinoff end with a reading of the Christmas story from the Gospel of Luke by a lisping little boy named Linus.

“We told Schulz, ‘Look, you can’t read from the Bible on network television,’ ” Mendelson says. “When we finished the show and watched it, Melendez and I looked at each other and I said, ‘We’ve ruined Charlie Brown.’ “

According to a recounting on MentalFloss.com, CBS executives also told Schulz: “You can’t read from the Bible on network television.”

But CBS had made a commitment to their sponsor, so they aired the special as scheduled on December 9, 1965. And, as often happens in the world of entertainment, the original gut reaction of the suits was completely wrong. A Charlie Brown Christmas drew in 15.4 million viewers, placing it second in the ratings that week after Bonanza. A few months later, Charles Schulz and Lee Mendelson found themselves onstage accepting an Emmy Award for Outstanding Children’s Program.

And so, the Charlie Brown creator persevered and created a Christmas classic that endures 54 years later. In case you don’t remember the iconic moment, here it is:

For unto you is born this day in the city of David a Savior, which is Christ the Lord. And this shall be a sign unto you; Ye shall find the babe wrapped in swaddling clothes, lying in a manger. And suddenly there was with the angel a multitude of the heavenly host, praising God, and saying: ‘Glory to God in the highest, and on Earth, peace and goodwill towards men.’

“That’s what Christmas is all about, Charlie Brown.”