CNN host and media reporter Brian Stelter appeared on the Hugh Hewitt radio show Monday to promote his book Hoax. Hewitt was very pleasant, but eventually he pressed Stelter on Russian collusion, the Steele dossier, and Michael Avenatti. (Transcript HERE.)  Stelter’s answers were embarrassing. Everything that used to be the source of “bombshells” were now irrelevant.

STELTER: You know, I’m not going to play a game about a word that is irrelevant to the question at hand. There’s still a lot we don’t know about the President’s ties with Russia, period.

HEWITT: But Brian, that kind of asks, that begs the question. Your criticism in Hoax, a lot of is based in the coverage of the Mueller investigation and how they downplayed it and called it a hoax. It turns out there was no collusion, and it turns out we know this week, you couldn’t have known it during writing of Hoax…that the primary sub-source of the Steele dossier is probably a Russian agent, correct?

STELTER: I think there’s a fantasyland that Fox promotes about what you’re describing, about the Steele dossier and all of that that distracts from the key questions about Trump’s ties with Russia. We now know from the New York Times, hundreds of millions of dollars of loans. Who does the President owe money to? We need to know. We deserve to know that, Hugh.

HEWITT: Brian, that’s a deflection. The primary sub-source of the dossier was revealed last week to be a Russian agent investigated by the Obama Department of Justice in 2009 and ’10. The dossier is discredited. There was no collusion. These are factual matters. That’s my problem with Hoax.

STELTER: I’m reflecting, I’m a media reporter, and I’m not a Steele dossier reporter. What I know is that when you use the word hoax over and over again the way the President has, it’s dangerous and poisonous, because it makes people think there’s nothing real and nothing true anymore. And that’s what I think the problem is.

HEWITT: Will you at least agree with me that the primary sub-source of the dossier has been revealed to be a Russian agent?

STELTER: I literally do not know, because I’m a media reporter.… I hate to disappoint you. I just, I don’t cover the dossier over the air…

This is Not True. Greg Price at the Daily Caller (former NewsBusters intern) recalled Stelter pressing the dossier on Kellyanne Conway in 2017:

This is an exchange @brianstelter had with KellyAnne Conway in November 2017 in which he accused her of spreading “misinformation” and “misleading the American people” for saying that the Steele Dossier is unverified https://t.co/GimUHNa8nd pic.twitter.com/7eiL59pXT6

From there, Hewitt jumped in to recall formerly ubiquitous Michael Avenatti, who appeared on CNN over 120 times:

HEWITT: There is not one mention of Michael Avenatti in your book, Hoax. Is that intentional on your part?

STELTER: Why would I mention Michael Avenatti? He’s irrelevant.

HEWITT: : He was part of the people who slimed Justice Kavanaugh. And he, in fact, propagated a hoax that was repeated on many networks.

STELTER: My book is about Fox and Trump and why Trump is obsessed with Fox, and why he gets misinformation from Fox. And Avenatti wasn’t really on Fox much, was he? 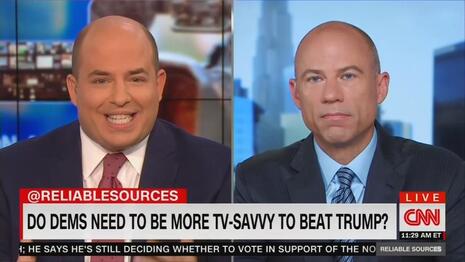 STELTER: Of course, he was. But if the President was watching CNN more, if he was watching a higher quality content, he wouldn’t get misinformed less often and then he would, he would, that’s the crux of the problem. And that’s why they’re not all the same.

HEWITT:  But if he’d been watching your show during Kavanaugh, he would have heard Avenatti say about his nominee completely false things.

It’s not true that Avenatti’s accuser Julie Swetnick wasn’t saying false things when she charged Kavanaugh with participating in gang-rape parties? Even Joe Scarborough was crying hoax on that.

Hewitt tweeted after the interview: “Brian told me this AM he doesn’t know much about the Steele Dossier or the news about the primary sub-source. Brian is a good guest, open to criticism, but this is a huge blind spot.”