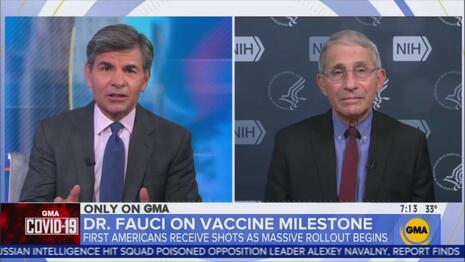 Now that there’s hope on the horizon with the Pfizer coronavirus vaccine being distributed here in this country, the morning networks have been singing a different tune about how safe this vaccine is. After spreading anti-vaccine quackery on Good Morning America leading up to the November election, ABC’s George Stephanopoulos urged Americans to “trust” Dr. Fauci that this vaccine is safe to take, on Tuesday’s GMA.

During his interview with Stephanopoulos, Fauci stressed the importance of getting the country vaccinated “as quickly as possible” to prevent the loss of more lives. The GMA anchor prodded him to explain why this vaccine was safe: “As you know there’s still a lot of skepticism about the vaccine. I was talking to a couple members of our crew. The basic question is how can we be sure it’s safe when it was developed so quickly?” he asked. After Fauci explained how no corners were cut, Stephanopoulos asked if both Trump and Biden should take the vaccine. He finished the segment by urging Americans to trust the vaccine’s safety:

STEPHANOPOULOS: Boy a lot of important information about the vaccine, right there.

ROBERTS: Especially about how quickly it was put out, and his explanation to it and that has been not just our crew, but many people are wondering, and there is a clear explanation as to why.

STEPHANOPOULOS: And you can trust him.

MICHAEL STRAHAN: Without a doubt.

Co-anchor Robin Roberts also brought on one of the first nurses in New York to take the vaccine, so that she could encourage Americans who are hesitant to take the potentially life-saving medicine.

Roberts invited the nurse to share her positive story and encourage others to trust its safety: “You know the hesitancy all across the country. How do you continue to ease the fears that some people have about the vaccine?” she asked.

But GMA wasn’t trying to convince Americans of the vaccine’s safety leading up to the election. In September, ABC, along with the other networks, spread dangerous conspiracies about the vaccine…that came straight from Joe Biden and Kamala Harris’s mouths. George Stephanopoulos and Cecilia Vega in particular repeatedly questioned if Americans should take any vaccine developed while Trump was in office.

[H]ighlighted a ‘Trump administration vaccine’ and played a clip of Harris spouting conspiracy theories about the completion of one: ‘It would have to be a credible source of information that talks about the efficacy and the reliability of whatever he’s talking about. I will not take his word for it.’

On September 17, Vega teamed up with Stephanopoulos to spread fear about a crucial vaccine. After taking CDC director Robert Redfield out of context, Vega slammed Trump for saying a vaccine would be available this year:

“Now people in this country are forced to choose whether to believe the President or the nation’s top health experts!” Vega vented. She touted Joe Biden politicizing the vaccine while omitting his anti-vaccine comments, before she continuing to question the safety:

VEGA: Dr. Redfield said that the scientific integrity of the CDC had not been compromised by politics, George. There are serious questions about whether that is actually the case this morning.

Stephanopoulos went on to spread rumors that there was “pressure” on the CDC from Trump to develop a vaccine faster, while asking, “Can Americans still trust what they’re hearing from the CDC?”

And again, with less than a month until the election, Stephanopoulos brought on Democrat New York Governor Andrew Cuomo to sow panic and unabashedly declare that a vaccine would only be safe with Biden in office.

On November 9, he brought on Cuomo again to badmouth the “bad news” that a “flawed” Trump vaccine would be available before Biden took office.

GMA’s politicized about-face on a life-saving vaccine was paid for by advertisers, IBM and State Farm, you can contact them at the Conservatives Fight Back page here.